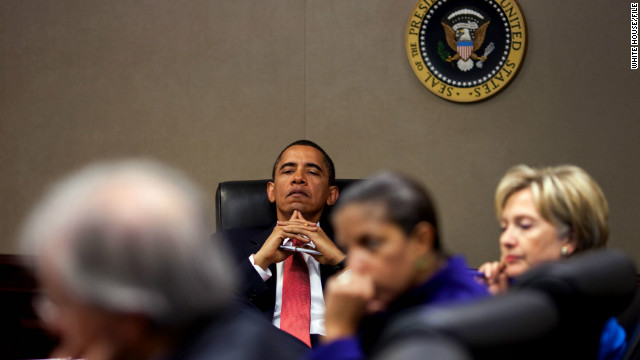 (CNN) – The meeting Wednesday between President Barack Obama and corporate bosses centered on a decidedly urgent topic, cybersecurity, but the meeting itself wasn't designed to respond to any particular threat.

So why did it take place in the White House Situation Room, normally reserved for the president's national security team?

It's all a matter of space, the White House said.

"I know it sounds super cool, but as those of you who are familiar with the West Wing (know), it is an amazingly small space. And when the Roosevelt Room is occupied with a meeting … at the same time, the options are few for a meeting of any size that would exceed, say, my office," White House Press Secretary Jay Carney explained Wednesday.

"We have meetings there on occasion on different topics that are not related to national security issues or classified matters," he added later.

One of the executives meeting with Obama, Honeywell CEO David Cote, said afterward that "it was pretty cool to be in there."

And while there wasn't a particular threat on the table, computer hacking poses a "consistent, persistent threat" to U.S. companies, Cote said.

"It's not like there's some big thing that we're all having to work on right now, so I think you can put that out of your mind," continued Cote, a regular at meetings between the president and business executives.

"Everybody's very interested in the idea of cybersecurity," Cote told reporters after the meeting. "We learned that all of us are equally concerned about it. This is a great place for government and business to work together."

The fact that the cyber playing field is so new and evolving so fast should concern the whole country, Cote said, and recent actions from the Obama administration reflect that concern.

"Just having this meeting I think is huge," he said. "And the fact that they issued the executive order is a big deal and the attempt to get legislation in the past is an indication that there's a recognition," of the seriousness of the threat.

The president signed an executive order last month to increase information-sharing and to help the private sector develop standards.

A White House official said Obama convened the meeting "to demonstrate the importance he and his administration place on the issue of cybersecurity."

The official said that among the topics discussed was the need for legislation addressing cyberthreats.