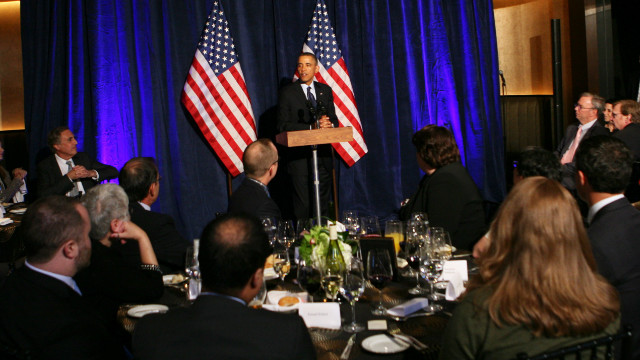 Instead, Obama described OFA's mission as making sure "the voices of people who put me here continue to be heard."

"We are helping to build, or sustain, a network of citizens who have a voice in the most critical debates that are going to be taking place next year," Obama said at the dinner, which was attended by roughly 70 people sitting at round tables.

Some Republicans have criticized the group as merely a conduit for wealthy donors to buy access to Obama, though the White House firmly denied meetings with the president could be purchased.

Critics have also said the group's creation signals the president’s early entry into the 2014 midterm elections. Obama said Wednesday that's not the case.

"I think here in Washington this idea has been viewed … both with suspicion, and people have been puzzled with what we're trying to do," he said. "Because the usual idea is, well, this must be a mechanism to win the next election in 2014, and what we've tried to explain to people is actually, I just want to govern. At least for a couple years."

Lawmakers in conservative districts will be bolstered by OFA as they make tough political choices during his second term, Obama said, pointing to upcoming votes on immigration reform and gun control.

"I want to make sure they feel supported, even if they may get a lot of pushback in that district," he said.

As for critics who charge that OFA's big donors are buying access, Obama pointed back to his presidential campaign, where he said political favors weren't expected in exchange for contributions.

"One of the things that I'm proudest of, during the course of two campaigns where we raised an awful lot of money, is that the people who got involved didn't ask me for stuff, expect for me to be true to my vision, and true to my agenda," Obama said.