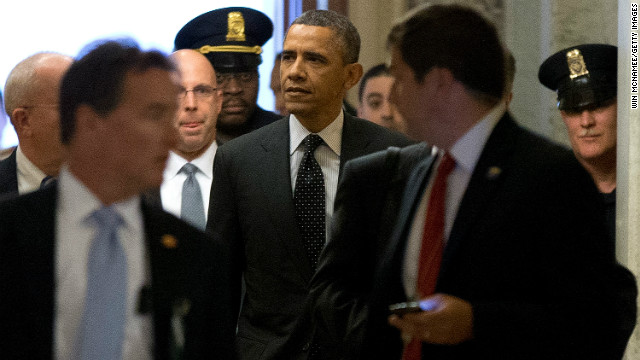 Obama on charm offensive: Ultimately differences may be too wide

(CNN) - Talking about his recent outreach to congressional Republicans, President Barack Obama said there's a chance the bipartisan talks could all fall apart.

"Right now what I'm trying to do is create an atmosphere where Democrats and Republicans can go ahead and get together and try to get something done. But ultimately it may be that the differences are just too wide," he said in a television interview that aired Wednesday.

The president, who made his comments on ABC's "Good Morning America," is scheduled to meet with House Republicans on Capitol Hill later Wednesday. It marks the latest step in his recent change in approach to the GOP.

Last week the president dined with 12 Republican senators and lunched with Rep. Paul Ryan, chairman of the House Budget Committee and last year's GOP vice presidential nominee. He's also been on the phone with two Republican senators–Sen. Jeff Flake and Sen. Mark Kirk–about immigration and gun laws, among other issues.

Republican Rep. Tom Price of Georgia said Wednesday morning that Republicans will welcome Obama to the Capitol but they hope this is not simply a one-time stop.

"I'm hopeful that this is the first step in a long process of getting together and working together to find the common ground so that we can solve the incredible challenges that we have in this country," Price said on CNN's "Starting Point with Soledad O'Brien."

The president said his strategy is to "identify what I call the common-sense caucus," meaning a group of lawmakers who agree to make changes to entitlement reform on the spending side and close certain tax loopholes on the revenue side.

The meetings have been useful, he said, because he's realized that "people don't always know what I've proposed."

Obama, however, said that if Republicans stand by their calls for major entitlement reform and no new taxes, the president doesn't envision any sort of compromise being reached.

"If their position is we can't do any revenue or we can only do revenue if we gut Medicare or gut Social Security or gut Medicare. If that's the position, then we're probably not going to be able to get a deal," he said.

Ryan introduced his budget Tuesday, a plan that closely resembles his previous proposals that received sharp criticism from Democrats. His plan again proposes no taxes, changes to Medicare, a repeal of Obama's health care reform law, and support for the controversial Keystone XL pipeline.

Senate Budget Chairwoman Patty Murray will propose the Senate Democratic budget on Wednesday, an outline that's not expected to balance the budget in a decade, unlike Ryan's plan.

Obama said he'll introduce his own budget the week of April 8 and also said it won't balance the budget in 10 years.

In a clip from the interview that aired Tuesday night, the president said his goal "is not to chase a balanced budget just for the sake of balance."

"My goal is how do we grow the economy, put people back to work," he continued. "And if we do that we are going to be bringing in more revenue. If we control spending and we have a smart entitlement package, then potentially what you have is balance – but it is not balance on the backs of the poor, the elderly, students who need student loans, families that have disabled kids. That is not the right way to balance our budget."

- CNN's Kevin Liptak and Jim Acosta contributed to this report.