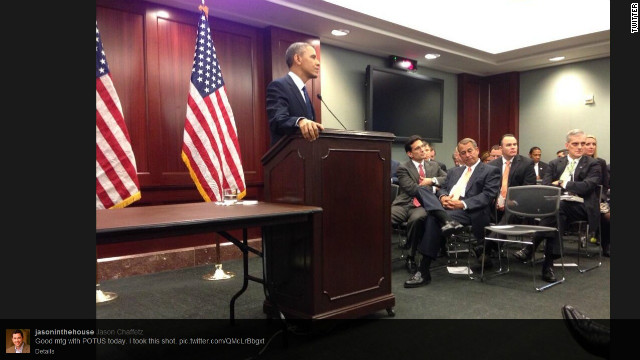 Shorter Obama to GOP: Help me help you

Washington (CNN) - The way administration officials describe it, President Barack Obama's message to congressional Republicans can be summed up as "help me help you."

On issues ranging from the debt to immigration reform, White House officials said the president told House GOP lawmakers in their closed-door meeting that he is no longer interested in the next election cycle.

For example, on immigration reform, administration officials said Obama cautioned Republicans in the room that it's more in their interest than his own when it comes to striking a deal on the contentious, long-simmering issue.

But White House officials also took note of the standing ovation offered to the president by lawmakers in the room. Warmed by the gesture, Obama tried to hammer home the point that he understands both sides won't be able to overcome all of their disagreements.

"He noted that they did not need to resolve all policy differences to make progress on challenges facing the country where there is agreement," a White House official said in a statement on the meeting.

Contrary to initial reports that the president signaled the administration would approve completion of the Keystone Pipeline in the near future, officials said Mr. Obama did not tip his hand on the controversial project.

Despite the upbeat assessment of the meeting, White House officials remain somewhat dubious about the prospects of reaching a grand bargain on the deficit.

The president remains committed to seeking new revenues in the form of closing tax loopholes and deductions, the officials said, knowing full well it's a proposal many House Republicans are sure to oppose.