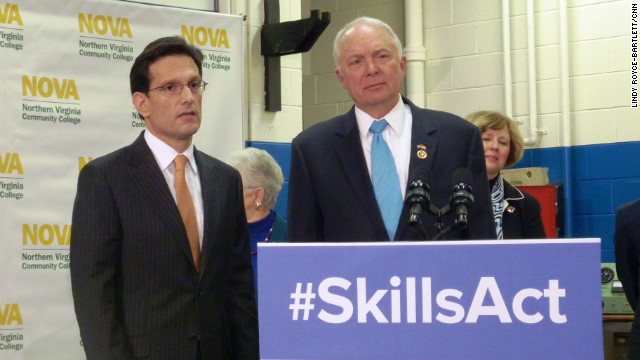 Washington (CNN) – Setting up another potential showdown with the White House, House Republicans plan a vote Friday on a bill focused on consolidating job training programs despite opposition from the other end of Pennsylvania Avenue.

The House is scheduled to take up the new bill, the Supporting Knowledge and Investing in Lifelong Skills, or SKILLS act, Thursday.

At an event promoting the bill at Northern Virginia Community College, House Majority Leader Eric Cantor spoke in support. "We're trying to streamline things and to make it so that people that are out of work, desirous of changing a career, wanting to access some of these jobs that need technical training with them can do so and that's plain and simple."

Introduced originally by Rep. Virginia Foxx, R-North Carolina, the bill is aimed at assisting some twenty million unemployed and underemployed Americans hoping to change their careers. Backers say it will streamline current overlapping job training programs, which, according to the House Committee on Education and the Workforce, cost the U.S. $18 billion every year.

"The suits in Washington don't have all the answers to what are the needs at the local level and what the SKILLS Act does is give a great deal more autonomy at the local level," Foxx said during the press conference Thursday at Northern Virginia Community College. "The president recognized it. He even mentioned it in his State of the Union Address in 2012."

President Barack Obama did talk about the topic in that speech, saying "I want to cut through the maze of confusing training programs so that from now on people...have one program, one website, and one place to go for all the information and help that they need. It is time to turn our unemployment system into a re-employment system that puts people to work."

However the Obama Administration put out a statement Wednesday opposing the SKILLS Act, saying it would "eliminate, or allow the consolidation of, many targeted programs, without providing the critical assistance needed by vulnerable populations such as veterans, low income adults...adults with literacy and English language needs [and] people with disabilities."

But the chairman of the House Committee on Education and the Workforce, Rep. John Kline, R-Minnesota, promises the bill includes help for those people. "We believe that it actually provides better service for those groups than that current maze - that they will do better under this. We do not ignore them. It's spelled out specifically."

The House of Representatives is scheduled to vote on H.R. 803 sometime Friday.