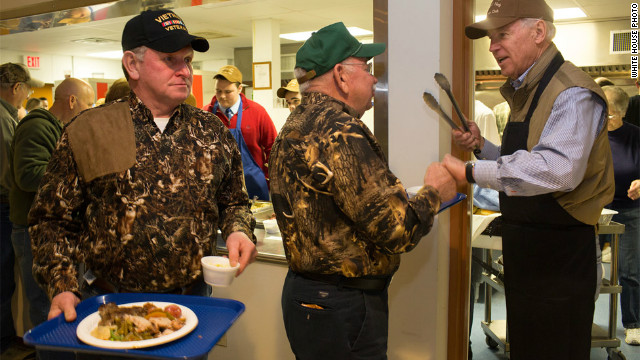 Just in case you wonder what it's like 'Being Biden'

(CNN) – Joe Biden has never been known for being short of words.

But in case Americans were looking for more of the vice president's inner thoughts, the White House launched an audio series Thursday promising to convey "what it's like 'Being Biden.'"

The series, in which Biden explains the story behind a single photo, began with the vice president detailing the circumstances of his recent trip to help out at a charity dinner with wild game on the menu.

"It's called a wild game dinner, and they go out and they hunt for wild game that they then cook up and serve at the Leipsic Fire Hall," Biden says in almost three-minute episode. "All the money goes to charity and then there's an auction and they auction off guns and bows and all that money as well goes to, originally went to defray the costs and expenses of a buddy of theirs who was injured in a hunting accident years ago and now it goes to help people in need."

Biden, who led the White House's effort to draft gun control proposals in the aftermath of December's deadly shooting in Newtown, Connecticut, said the men in the photo believe in the Second Amendment right to bear arms, as does he, but that they recognize there's a requirement for gun owners to be responsible.

"I know these guys, and I know an awful lot of them. I've been doing it for over 30 years. They're my friends, but the point is they are absolutely, totally responsible," Biden says.

There's no indication on the "Being Biden" website of how often the series will be updated, though every episode will follow the model of the vice president explaining of photo of himself.

Biden explained the series this way: "I wanted to start this audio series to give you all a closer look inside the life at the White House and the vice presidency. It's a fascinating world, and I'd like to share some of my experiences with you. I've gotten to meet some amazing people in this job and work on issues I'm passionate about."

Biden follows began wrangling for a more candid view of the veep in January, when an online petition was created on the White House website calling for Biden to star in a reality show. The petition, which didn't garner enough signatures for an official response from the Obama administration, said Biden "has a demonstrated ability to bring people together, whether at the negotiating table or at the neighborhood diner."

It went on to pitch the production of a "recurring C-SPAN television program featuring the daily activities and interactions" of Biden with other elected officials.