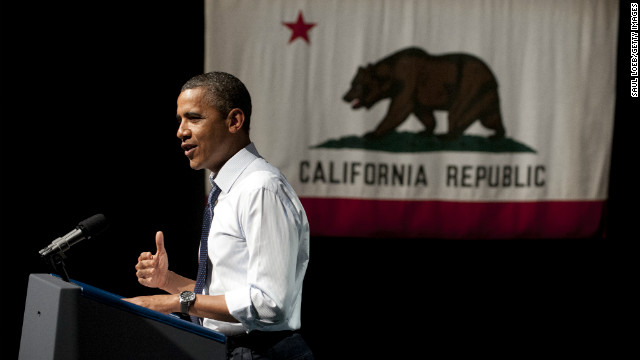 Obama headed to California for fundraisers

(CNN) – President Barack Obama is heading back to the Golden State for fundraisers in April, emailed invitations to the events show.

"Just wanted to give you a quick heads up that Barack will be back for his first visit of his 2nd term on Thursday, April 4, to help retire the debt of the Democratic National Committee that remains from our victory in November," tech executive Wade Randlett wrote in the invitation to supporters. Randlett is the chairman of the Bay Area Democrats.

The e-mail noted the locations for the two events – a brunch and a lunch – were still being finalized, but said they would take place in Silicon Valley. The invite did offer a price point for each meal: $32,400 to attend the brunch, and between $1,000 and $20,000 to attend the lunch.

Democratic Party officials told CNN in February the president would hold 14 fund-raising events this year for congressional Democrats, 10 of which would take place outside Washington. The others will take place in the nation's capital.

Some Republicans have accused Obama of being overly focused on electing Democrats to Congress in 2014, since the midterm elections are well over a year away.

White House Press Secretary Jay Carney has dismissed those assertions, saying in early March "it's not a focus of his, particularly, at this point."

But raising money, as evidenced by Obama's upcoming trip to California, hasn't been completely erased from his schedule. And on Wednesday, Obama spoke at a high-dollar dinner put together by Organizing for Action, the group formed from his presidential campaign.

"I used to say that being friends with a politician is like perpetually having a kid in college, because you're writing checks all the time and it doesn't seem like the kid ever graduates. Well, I've graduated. I've run my last campaign. But we're not done with the work that led me to run in the first place," Obama told the crowd of 60, which included Google founder Eric Schmidt.

"I'm hopeful that with your continued ideas and support, your voices, that we can continue to make progress over the next several years," the president concluded