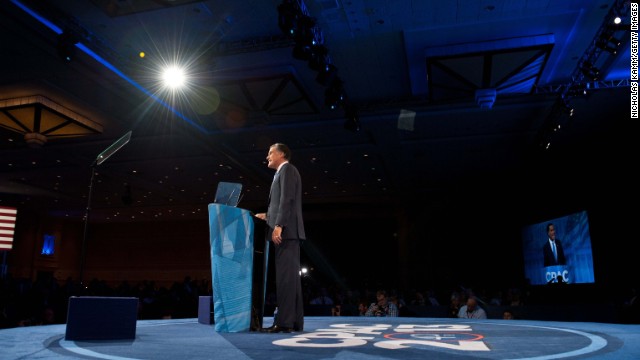 DEVELOPING: Maryland legislature votes to end death penalty… By an 82-56 margin, the Maryland House of Delegates voted Friday to ban the death penalty in that state. The bill now goes to Gov. Martin O'Malley's desk. “To govern is to choose, and at a time where we understand the things that actually work to reduce violent crime, when we understand how lives can be saved, we have a moral responsibility to do more of the things that work to save lives,” O'Malley said at a news conference. – Mark Morgenstein

‘A CHANGE OF HEART’: CNN Exclusive: One conservative's dramatic reversal on gay marriage... Sen. Rob Portman has been a leading Republican voice on economic issues for four decades. Now, the prominent Ohio conservative will be known for something else: reversing his hard-line position against gay marriage. "I'm announcing today a change of heart on an issue that a lot of people feel strongly about that has to do with gay couples' opportunity to marry," Portman told CNN. It has to do with another revelation, one deeply personal. His 21-year-old son, Will, is gay. "I've come to the conclusion that for me, personally, I think this is something that we should allow people to do, to get married, and to have the joy and stability of marriage that I've had for over 26 years. That I want all of my children to have, including our son, who is gay," said Portman. – Dana Bash

REACTION CUTS DOWN GENERATIONAL LINES: For Amanda Ihnat, a millennial and a conservative, Sen. Rob Portman's change of heart on supporting same-sex marriage was a much-needed — albeit tardy turnaround. For fellow conservative Peter Konetchy, a baby boomer, the Ohio Republican's switch signals a decided lack of principles. The two divergent views illustrate the kind of challenges facing the Republican Party as it undergoes a major makeover after losing the 2012 presidential election. – Halimah Abdullah

DEVELOPING: First on CNN: Florida GOP to donate tainted contributions to charity... The Republican Party of Florida will donate $300,000 to charity, in an effort to wash itself of a scandal that forced Lt. Gov. Jennifer Carroll to resign early this week, CNN has learned. The Florida GOP was shedding donations from Allied Veterans of the World and affiliated entities, an allegedly corrupt charity that Carroll consulted for in 2009 and 2010. – Mark Preston

What Southern-born president was featured on both U.S. and Confederate currency?

Romney implored Republicans to look forward and learn “from my mistakes, and from our mistakes, so that we can win the victories those people and this nation depend upon."

Romney asked CPAC attendees to herald the achievements of governors that have “shown that they are able to reach across the aisle, offer innovative solutions and then they are willing to take the heat that you have to take to do important things.”

“We particularly need, by the way, to hear from the governors from the blue and purple states because those are the states we are going to have to win to take the Senate and the White House,” Romney said.

That’s right, Romney specifically highlighted Christie and McDonnell, who were not asked to speak at this year’s conference. Of the governors Romney listed only Walker has a prominent speaking slot.

This lack of inclusion has worried a cadre of high-profile Republicans, particularly the Christie and McDonnell snubs.

Republican Rep. Peter King of New York described the exclusion of Christie as a sign of “narrow-minded bigotry,” and former House Speaker Newt Gingrich called it a mistake.

Al Cardenas, chairman of the group that runs CPAC, said he did not invite Christie back to the event this year because the governor has not held conservative positions in recent months.

Republicans have been doing a lot of soul searching about the future direction of their party since President Barack Obama won reelection in November. A common theme from those attending CPAC this year was that Romney lost because he failed to effectively deliver his message, failed to connect with minority voters and the media was biased towards Obama.

On Monday, the Republican National Committee is releasing a detailed report that identifies solutions about how the GOP should move forward.

While Romney will not have any input in the RNC report, reading his speech signals what his suggestions would be.

Leading CNNPolitics: Paul Ryan: Democratic budget 'blowing smoke'
Three days after he unveiled the GOP budget, Rep. Paul Ryan stayed focused on the country's fiscal problems during his address to the Conservative Political Action Conference and took a dig at the Democrats' own budget proposal in the Senate. "You know, this has been a really big week. We got white smoke from the Vatican and we got a budget from the Senate," he said to applause. "But when you read it, you find that the Vatican's not the only place blowing smoke this week." – Ashley Killough

Leading Drudge: War Drums: US Deploys Missiles
Defense Secretary Chuck Hagel will announce Friday that the U.S. is deploying 14 new ground-based missile interceptors, probably in Alaska, defense officials told NBC News. The officials didn't say specifically why the interceptors were being deployed, but the announcement comes as North Korea has been making bellicose threats to void the armistice that ended the Korean War and launch a nuclear attack on the U.S. – M. Alex Johnson for NBC

Leading HuffPo: 'I'm Still Standing'
National Rifle Association CEO Wayne LaPierre attempted to turn the tables Friday on those in the media and government who have recently characterized the gun lobbyist's talking points as "crazy." In a speech at the Conservative Political Action Conference, LaPierre accused the federal government, the Department of Homeland Security, so-called "Washington elites" and Vice President Joe Biden of offering illogical solutions to the challenges of gun violence. – Christina Wilkie

Leading Politico: Sarah Palin's next act: Candidate or 'Kardashian'?
In January 2009, Sarah Palin had the world on a string. A potential Republican presidential field-clearer for the presidency, every sentence she uttered was news. A Fox News contract awaited her. So did book deals. Four years later, Palin is without a clear option for elected office — or a clear sense she has an interest in any position of real public influence. She never took an active, leadership role in the tea party movement, beyond showing up at a scattered handful of events and talking it up on television. For many Americans, her name is now primarily a punchline and if she is envisioning a comeback, it may simply be too late. – Maggie Haberman

Leading The New York Times: Republicans Are Divided on Proper Role for U.S. Abroad
A new generation of Republican leaders is questioning the approach of an aggressive use of American power abroad as a policy imperative and a political advantage. – Michael Shear

- Jindal chides GOP's 'obsession with zeroes' in budget battles -
LOUISIANA GOV. BOBBY JINDAL IN A SPEECH TO CPAC: “The reality is these are government sideshows in Washington that we have let take center stage. … As conservatives we are falling into the sideshow trap. All of these sideshow debates are about the government. Today's conservatism is far too wrapped up in solving the hideous mess that is the federal budget.”

- Immigrants won’t vote for Republicans, says Trump -
BUSINESSMAN DONALD TRUMP IN A SPEECH TO CPAC: “You can be out front, you can be the spearhead, you can do whatever you want to do, but every one of those 11 million people will be voting Democratic. It's just the way it works and you have to be very, very careful because you could say that to a certain extent, the odds aren't looking so great right now for Republicans, that you're on a suicide mission. You're just not going to get those votes.”

- NRA leader: I am going nowhere -
WAYNE LAPIERRE, HEAD OF THE NATIONAL RIFLE ASSOCIATION, IN A SPEECH AT CPAC: “The political elites – they may not like it, the liberal media – they can keep hating on me but I’m still standing unapologetic and unflinching in defense of our individual freedom. You know they can call me crazy or anything else they want, but NRA’s nearly five million members and America’s 100 million gun owners will not back down not ever! I promise you that.”

- Santorum shows why he relates to social conservatives, with story about his deceased nephew -
FORMER SEN. RICK SANTORUM, R-PENNSYLVANIA, AT CPAC: “Medicines were effectively blocking all of his physical pain. We were the ones in pain. Our family and his girlfriend were in incredible agony as he slowly and peacefully took his last breath. I couldn’t help but have my experience yesterday impact my message here to you today. I thought of Buddha’s first noble truth – to live is to suffer. … If all we do this weekend is offer Americans a better way to get more stuff in hopes that they, that this will dull their pain, we and America will lose. Face it – the left can always promise more stuff and make it sound like they care more because they make it easier for Americans by providing the stuff for them through government programs paid for by somebody else’s money. For those in our movement who want to abandon our country’s moral underpinnings so we can win – permit me to paraphrase a great teacher (Matthew) and ask ‘what does it profit a movement to gain a country and lose its own soul.’”

Justin Lear (@CNNJustin)
Sec. Hagel is expected to announce Friday that the Pentagon is beefing up its ability to defend the U.S. from North Korea.

Will Portman (@wdportman)
Especially proud of my dad today http://www.dispatch.com/content/stories/editorials/2013/03/15/gay-couples-also-deserve-chance-to-get-married.html

Mark Garbett, Jr. (@MarkWMD)
If portman will moderate on the Bible and principles of faith, what wont he moderate on and waffle for political gain? His seat will b lost.

Look in almost any wallet and the picture of President Andrew Jackson is proudly emblazoned on the $20 bill.

Jackson is a popular monetary icon – U.S. currency is not the only paper note Jackson was featured on. For a brief time, Jackson was also featured on the Confederate $1,000 T-bill.

Christopher Memminger, the confederate Treasury secretary ordered the bills be made in March of 1861, shortly after the first shorts of the Civil War were fired at Fort Sumter, South Carolina. According to the New York Times, a northern firm, the National Bank Note Company of New York, engraved the first notes.

Although Jackson died in 1845, years before the outbreak of the Civil War or the advent of the Confederacy, he became a Southern icon.

He was born on this day in 1767 in the backwoods of the Carolinas. When he was 13-years old, he was captured by a British soldier – making him the only prisoner of war to become president. A lauded general, a senator from Tennessee and a two-term president of the United States, Jackson became known as “Old Hickory” after his toughness and resilience.

After retiring from politics, he moved back to his home state, Tennessee, and lived in the Hermitage, his plantation in Davidson County.