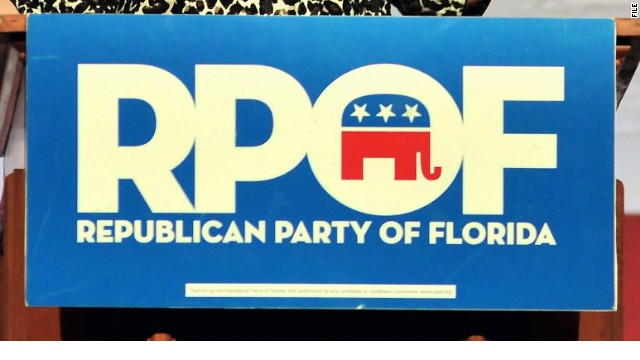 (CNN) – The Republican Party of Florida will donate $300,000 to charity, in an effort to wash itself of a scandal that forced Lt. Gov. Jennifer Carroll to resign early this week, CNN has learned.

The Florida GOP was shedding donations from Allied Veterans of the World and affiliated entities, an allegedly corrupt charity that Carroll consulted for in 2009 and 2010.

Florida GOP Chairman Lenny Curry said that the money would be donated to the Florida Veterans Foundation. This charity helps homeless veterans, and this money will also help to pay to fly WWII veterans to Washington, DC to visit the World War II Memorial.

"It is outrageous to all Floridians that anyone would use our veterans as a front for criminal actions," said Curry, who noted the state party had identified $271,000 that was donated by Allied Veterans of the World and affiliated entities "in the current and most recent campaign cycle."

"RPOF has a history of supporting the men and women who serve in the military, and we will always do everything we can to support America's veterans," Curry said. "That is why we will contribute a total of $300,000 to this great organization and the heroes they help."

The Florida Democratic Party, which also received contributions from Allied Veterans of the World, said Thursday it would be returning donations related to the charity.

"We are in the process of doing a review of all of our contributions from these entities," party spokeswoman Brannon Jordan said in an interview with CNN. "But we have identified two (contributions) in the amount of $72,000, which we will be returning to charity and that number may grow as we continue our review."

Allied Veterans of the World operates internet gambling parlors, and officials are accused of misusing proceeds for personal gain including purchasing luxury goods for themselves.

Fifty-seven people have been arrested on racketeering and money laundering charges in connection. Carroll, who was elected in 2010, has not been charged.

Florida Gov. Rick Scott, who accepted Carroll's resignation earlier this week, said law enforcement officials interviewed her "about her work for this company," and she decided to step down "in an effort to keep her affiliation with the company from distracting our efforts to help make sure we do the right thing for Florida families."

CNN's Josh Levs and Elwyn Lopez contributed to this report