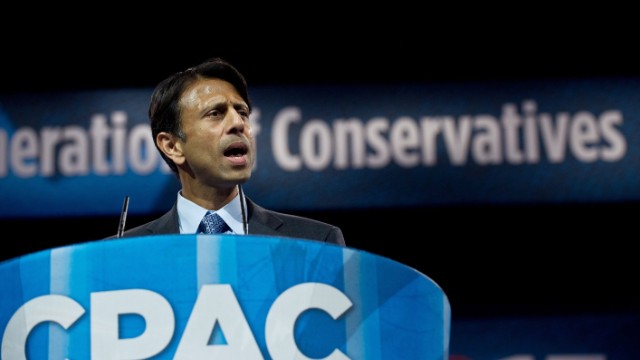 (CNN) – The current Republican Party is distracted by the constant battles in Washington over the bloated federal debt, Louisiana Gov. Bobby Jindal told a gathering of conservative activists Friday.

Bucking some in his party's tendency to place balancing the federal budget over all other issues, Jindal said such a narrow focus on the country's fiscal problems amounted to a diversion.

"The reality is these are government sideshows in Washington that we have let take center stage," Jindal said of recent battles over increasing the federal debt ceiling and avoiding the so-called fiscal cliff. He was speaking at the Conservative Political Action Conference being held outside Washington.

"As conservatives we are falling into the sideshow trap," Jindal continued. "All of these sideshow debates are about the government. Today's conservatism is far too wrapped up in solving the hideous mess that is the federal budget."

That message is a far cry from what some of his fellow Republicans have been pushing in recent months. Congressional Republicans in particular have been almost singularly focused on ways to reduce the federal debt, sparring with the White House on increasing tax rates for wealthy Americans and cutting spending to entitlement programs.

While Jindal acknowledged the federal budget was mired with problems, he said the GOP fixation on bringing the deficit to zero was clouding the party's collective focus.

"Today's conservatism is in love with zeroes," Jindal said. "We seem to have an obsession with government bookkeeping. I'm here to tell you it's a rigged game. It's the wrong game for us to be playing."

Instead, Republicans should focus on how best to grow the economy, Jindal said, saying budget cuts shouldn't become the GOP's calling card.

Since last November's election loss for Republicans, Jindal has been a prominent voice for change within the party, saying at one point ""We must stop being the stupid party."

That statement, not repeated Friday, was sharply criticized by businessman Donald Trump during his CPAC speech earlier in the day.