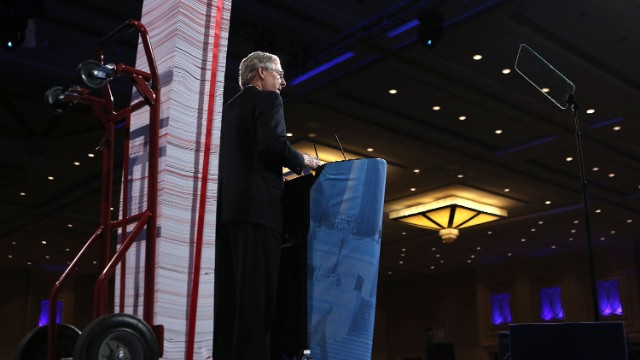 (CNN) – Kentucky Democrats are labeling remarks made by Sen. Mitch McConnell at a conservative conference Friday "disgusting" and "way over the line," and demanding an apology from the Senate Republican leader.

The remarks came at the Conservative Political Action Conference outside Washington. Looking ahead to the 2016 presidential election, McConnell quipped, "Don't tell me Democrats are the party of the future when their presidential ticket for 2016 is shaping up to look like a rerun of the 'Golden Girls.'"

He went on to cite three young Republicans -Sen. Rand Paul, Sen. Marco Rubio, and Rep. Paul Ryan – as rising starts within the GOP, concluding, "And the other guys? They've got Hillary and Joe Biden."

In an email to supporters, Kentucky Democratic Party Chairman Dan Logsdon equated McConnell's remark about the "Golden Girls" to a personal attack on Clinton. "Golden Girls" was a television series about four older women living in Florida that ran from 1985 to 1992.

"I can't believe it, I have always admired Hillary Clinton for all she has done," Logsdon wrote in the email. "Not just for America, but for women worldwide. It's disgusting that Mitch McConnell would resort to these kind of petty attacks."

The email links to an online petition demanding an apology from McConnell.

During his speech Friday at CPAC, McConnell himself hit back at personal attacks directed at his wife, former Labor Secretary Elaine Chao.

A controversy was ignited last month by the liberal group Progress Kentucky, which drew a connection in a Tweet between Chao, who's Chinese-American, and the practice of outsourcing of jobs.

"This woman has the ear of @McConnellPress – she's his #wife," read the February 14 tweet from the group, referring to McConnell by his official Twitter account. "May explain why your job moved to #China!"

After strong criticism from McConnell's campaign, Kentucky Progress apologized to the senator and his wife.

"Don't tell me we're the party of intolerance when nearly two years before an election, some left-wing super PAC is sending out racist tweets about my wife for the supposed crime of being born in another country," McConnell said to applause.