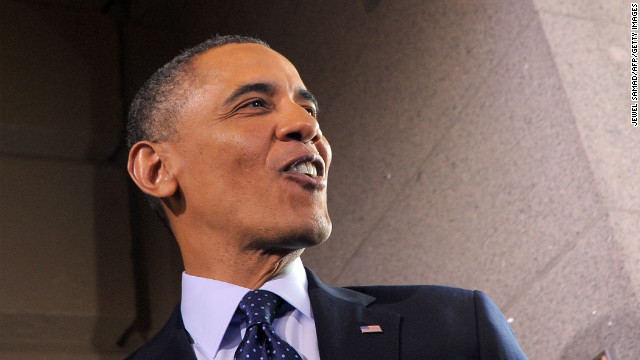 Washington (CNN) – With climate change as one of his administration's top priorities and the decision on the controversial Keystone pipeline expected at any time, President Obama took his energy message to Chicago Friday.

The president pressed Congress to pass an energy proposal that the administration says would target two billion dollars over ten years to wean cars and trucks from fossil fuels to clean energy and create clean energy jobs.

"Right now, few areas hold more promise for creating good jobs and growing our economy than how we use energy, Obama told a crowd numbering 400 at the Argonne National Labs outside Chicago. The crowd was largely made up of engineers and scientists employed at by the federally-funded laboratory.

Speaking in front of three hybrid vehicles manufactured by Honda, Chevrolet, and Ford respectively, Obama pledged that the money to fund the alternative fuel research will come from increased royalties from oil and gas drilling and leasing on federal land.

The president first announced his Energy Security Trust plan at his State of the Union address last month.

"This is not a Republican idea or a Democrat idea. It's a smart idea, Obama said, noting the proposal was first introduced by a coalition of individuals that included business CEOs and former members of the military."

"We can support American ingenuity without adding a dime to our budget," he added.

White House officials were quick to point out the administration does not plan to expand drilling areas especially on the Outer Continental Shelf but instead expect increased revenues due to streamlined leasing, increased production and upward price trends.

The Energy Security Trust would require an act of Congress but White House officials said they are encouraged by early bipartisan support.

The speech followed a tour of a sprawling laboratory that included stops at a thermal test chamber and at prototype hybrid engine. He also met with longtime engineers at the facility. Obama later joked he had hoped he'd come out of the thermal chamber "looking like the Hulk."

Obama also took the opportunity to rail against the so-called sequester, warning that new research projects at laboratories like Argonne would be halted for at least two years if the cuts are allowed to continue.

"Imagine what that means when China, and Germany, and Japan are all continuing to plump up their research and we are just sitting there doing nothing," he said.

The White House says this is just the latest in the president's "all above" energy approach. The Environmental Protection Agency Friday is expected to release a new report which the administration says underscores the progress made on the clean energy front including EPA estimates that CO2 emissions have decreased by 13% in the past five years and that fuel economy standards have increased by 16%.