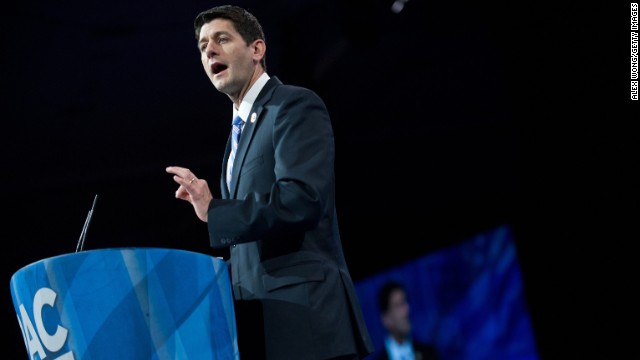 But at the Conservative Political Action Conference - which Ryan described Friday as a place where he could "catch up with friends" - he was slammed on Saturday by conservative activist Brent Bozell.

"Do yourself and your country a favor. Take that budget back and return with a new one," Bozell said, urging Ryan to make a yet more conservative proposal.

"Come with one that truly does reduce the size of government, that puts us on the path not to a balanced budget by reducing deficits, but a path to solvency by eradicating the national debt. Then watch what happens not just to your political aspirations but to your legacy."

Bozell did not deliver a harsher line against Ryan, which was in his prepared remarks provided to CNN: "This is not conservatism. It is, literally, Democrat Lite."

Bozell leads the group ForAmerica, which recently launched an effort to dissuade conservative donors from backing GOP strategist Karl Rove's group American Crossroads. At CPAC, Bozell dressed down Rove as a strategist who "had the worst political year in the history of man" in the form of 2012 and found "the worst investment return since the market crash of '29" in his campaign spending.

"The last thing the GOP needs is for the anti-conservative professional political consultant class infecting its ranks, and the last thing we conservatives want is then infiltrating ours," Bozell said, referring to GOP political strategists in a broad sense.

Bozell said the GOP should do away with those strategists because of their losses in November.

"If you need someone to pilot your ship, do you ask advice from the captain of the Titanic?" he asked rhetorically.

He also saved tough words for House Speaker John Boehner and his House GOP leadership, former Florida Gov. Jeb Bush, Virginia Gov. Bob McDonnell, and former Mississippi Gov. Haley Barbour. In most instances, he accused them of betraying promises made to the conservatives who elected them.

While Ryan and Bush delivered high-profile speeches, the others did not appear on the conservative main stage.