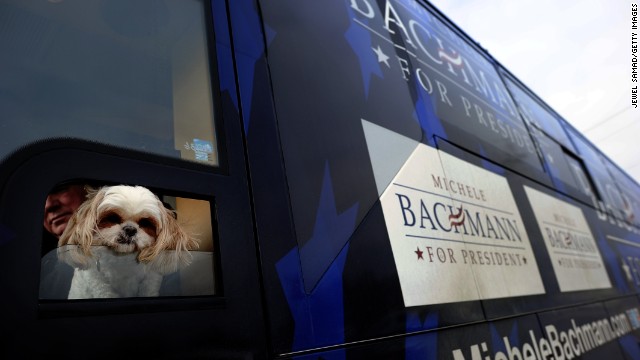 (CNN) - If Rep. Michele Bachmann had been elected president, would she have walked Boomer?

The former 2012 presidential candidate and Minnesota Republican said Saturday at the annual Conservative Political Action Conference just outside Washington that the White House is overly lavish, citing several examples including the minder of the presidential pooch.

Both she and President Barack Obama are dog owners. Hers is a beagle named Boomer and his is a Portuguese water dog named Bo. Obama bought the dog as a gift for his daughters after winning the White House in 2008.

Bachmann blasted what she called “a lifestyle that is one of excess” with several other claims.

“Now we find out that there are five chefs on Air Force One. There are two projectionists who operate the White House movie theatre,” she said.

She further claimed: “They regularly sleep at the White House in order to be regularly available in case the first family wants a really, really late show. And I don’t mean to be petty here but can’t they just push the play button?”

She invoked the recent White House decision to suspend public tours because of recent forced budget cuts. Republicans have charged that the Obama administration has its priorities backward, but administration officials have said the tour cancelation is an alternative to cutting Secret Service paychecks through furloughs.

“Now why are we doing that when we can’t even get a disabled veteran into the White House for a White House tour,” Bachmann asked.

But, she allowed, the leader of the free world should have a certain level of amenity.

"We all believe that the president and the first family, with all seriousness, do deserve the best security and the very best protection that we can get them,” she said. “They deserve to live in the White House. They deserve to fly on a private plane.”

But perhaps, she said, with fewer chefs.