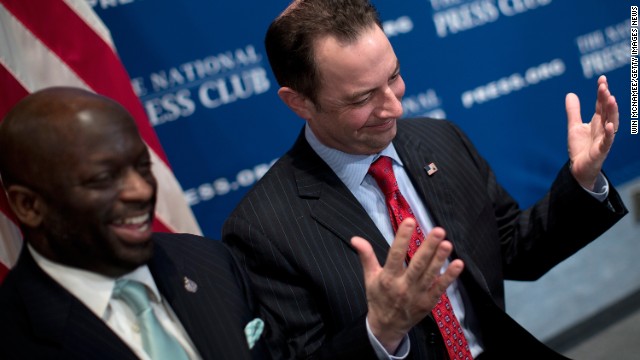 BLOOMBERG TACKLES TOBACCO: New York City Mayor Michael Bloomberg said his latest push to keep tobacco products out of sight is an attempt to de-glamorize the appeal of the product for kids and teenagers. “Smoking is going to kill these kids,” he said Monday on CNN's “The Lead” in an interview with Chief Washington Correspondent Jake Tapper. “It's going to leave them with not the great career prospects that you'd like, not the education that you'd like.” They mayor said they're trying to dissuade customers from viewing cigarettes as "normal." – Ashley Killough

OBAMA APPROVAL DOWN: A CNN/ORC International poll indicates that President Barack Obama's job approval rating has dipped below 50% for the first time since September, with half of the public saying they disapprove of the job he's doing in the White House. – Paul Steinhauser

GOP APPROVAL DOWN, TOO: According to the poll, 54% of Americans have an unfavorable view of the Republican Party, with less than three in ten saying they view the GOP in a favorable light.

TRAIL TRIVIA
(Answer below)
What state received presidential approval of statehood on this day in history?

The Republican National Committee released a much anticipated top down review of the party today, offering a harsh critique of where the GOP is now and where it needs to go. The headline of the report: The GOP is too old, too white, and too insular to win national contests.

RNC Chairman Reince Priebus initiated the review late last year, which included a look at a wide range of issues from party messaging to the mechanics of how the GOP chooses its nominee.

“When Republicans lost in November, it was a wake up call,” Priebus said at a news conference. “Our message was weak; our ground game was insufficient; we weren't inclusive; we were behind in both data and digital; and our primary and debate process needed improvement. So, there's no one solution, there's a long list of them.”

The 100 page report made 219 recommendations about how the party should proceed, and Priebus pledged to spend $10 million in a new marketing and ground game campaign to help change the image of the party. While there are too many recommendations to list, here are a few that caught our eye.

Messaging to a changing nation

In 2012, President Barack Obama overwhelmingly won Latino voters by 44 percent, African Americans by 87 percent, Asian Americans by 47 percent, and18-24 year olds by 24 percent. Priebus acknowledged that these numbers are troubling as the GOP looks to the future. He vowed to take steps to try and engage these voters.

“So, for the first time ever, we are going to overhaul our campaign mechanics structure to fully integrate our demographic engagement strategy,” he said. “For too long, our demographic inclusion efforts have been separate from on-the-ground political activities. No more.”

In a nod to the Obama campaign’s successful efforts of engaging voters early on, Priebus said the RNC would be placing paid staff in minority communities across the country to help explain and sell the GOP message. He even said RNC staffers would begin attending naturalization ceremonies to explain to the new American voters the Republican vision.
And the RNC suggests in the report that the GOP needs to be more inclusive and understand that all Republicans do not need to be united on every issue.

“Our 80 percent friend is not our 20 percent enemy,” Priebus said. “We can be true to our principles without being disrespectful of those who don’t agree with a hundred percent of them. Finding common ground with voters will be a top priority.”

An early summer convention and fewer primary debates are the recommendations put forth in the new report. The committee charged with writing the report noted that the drawn out primary hurt eventual Republican nominee Mitt Romney as the internal battle went on for months. Also, the committee suggested there were too many debates that highlighted Republican division instead showing a unified party. In 2012, there were 20 primary debates and the RNC is recommending that this number be cut in half.

“With an eye toward the recommendations, the RNC will embark on creating a system that sets earlier guidelines for a more rational number of debates,” Priebus said at a press conference. “We will take a leading role in organizing the debates.”

Learning from the states

The answers are not in Washington, according to Priebus and the report authors, who suggested that all Republicans need to look out to the states for answers.

“Republicans have lost the popular vote in the last six presidential elections,” the report reads. “States in which our presidential candidates used to win, such as New Mexico, Colorado, Nevada, Iowa, Ohio, New Hampshire, Virginia, and Florida, are increasingly voting Democratic. We are losing in too many places.”

The report added, “It is time for Republicans on the federal level to learn from successful Republicans on the state level. It is time to smartly change course, modernize the Party, and learn once again how to appeal to more people, including those who share some but not all of our conservative principles.”

Leading HuffPo: Break It Up
GOP uberconsultant Karl Rove lashed out at former Alaska Gov. Sarah Palin (R) on Sunday, mocking her decision to leave office early. Rove's criticism was a response to comments Palin made at the Conservative Political Action Conference in which she suggested the poor performance of Rove-backed candidates in the 2012 elections indicates that Rove should get out of the political consulting business. – Zach Carter

Leading Politico: RNC: Voters see GOP as 'scary' and 'out of touch'
The Republican National Committee concedes in a sprawling report Monday that the GOP is seen as the party of “stuffy old men” and needs to change its ways. Among the RNC’s proposed fixes: enacting comprehensive immigration reform, addressing middle-class economic anxieties head on and condensing a presidential primary process that saw Mitt Romney get battered for months ahead of the general election. – Maggie Haberman

Leading The New York Times: In Some States, Gun Rights Trump Orders of Protection
The National Rifle Association and its allies are challenging states’ efforts to take guns away from domestic violence offenders who have been served with civil protection orders. – Michael Luo

- Not all Republicans agree with the post mortem -
RUSH LIMBAUGH ON HIS NATIONALLY SYNDICATED RADIO SHOW: “The Republican Party lost because it's not conservative. It didn't get its base out in the 2012 election. Now, that's simple to say, and it's probably simple for you to agree with, but I'm telling you, that is a major mountain to climb within the party itself. As you well know, because the establishment in Washington, the ruling class, both parties, is not conservative, and in fact they fear it. They're very much worried about it because it's considered an outsider movement. So they kicked the tea party out; they try to deemphasize the tea party; don't use it, let's put it that way. They did not use the asset that the tea party provided them. The principles here are timeless, but go back now and redefine your principles and the message, and it's not it. It isn't that hard.”

- Gay Republicans welcome Republican autopsy -
GREGORY T. ANGELO, LOG CABIN REPUBLICANS EXECUTIVE DIRECTOR, IN A WRITTEN PRESS RELEASE: “Log Cabin Republicans applauds Chairman Priebus' remarks that the party needs to be welcoming of gay fiscal conservatives and respectful of differing opinions on matters such as marriage equality. There was a nine percent drop in the Republican gay vote from 2010 to 2012, and the Chairman's remarks show that the party is serious about getting those voters back.”

- Obama nominates Thomas Perez to head Department of Labor -
PRESIDENT BARACK OBAMA AT A WHITE HOUSE EVENT: “Like so many Americans, Tom knows what it's like to climb the ladder of opportunity. He's the son of Dominican immigrants. He helped pay his way through college as a garbage collector and working at a warehouse. He went on to be the first lawyer in his family. So his story reminds us of this country's promise, that if you're willing to work hard, it doesn't matter who you are, where you come from, what your last name is, you can make it if you try.”

- Is Obama’s charm offensive over? -
PRESS SECRETARY JAY CARNEY AT THE WHITE HOUSE PRESS BRIEFING: “Absolutely not… The president will continue to engage with members of Congress. … You know, the fact of the matter is there are Republicans who go along with the notion supported by the vast majority of the American people including a majority of self-identified Republicans that we can move forward on deficit reduction in a balanced way.”

Niels Lesniewski (@nielslesniewski)
Solving the Gardner Museum heist is big news. 13 pieces were stolen in 1990, including Rembrandt’s Storm on the Sea of Galilee

West Wing Reports (@WestWingReport)
One reason President not speaking before the Knesset: there were concerns he might be heckled. Carney avoided mentioning this

Jim Geraghty (@jimgeraghty)
Tomorrow's SC GOP primary is really, "who will win the right to face Mark Sanford in the runoff?" http://bit.ly/Xl3x8s

Indescision (@indecision)
The RNC released the autopsy of their 2012 campaign. SPOILER ALERT: Turns out the cause of death was suicide. http://on.cc.com/Wy9QK2

On March 18, 1959, President Dwight D. Eisenhower signed a bill that granted statehood to the territory of Hawaii.

“It has given me great satisfaction to sign the Act providing for the admission of Hawaii into the Union,” Eisenhower said at the bill signing. “Since my inauguration in 1953 I have consistently urged that this legislation be enacted, so the action of the Congress so early in this session is most gratifying.”

The president continued: “Under this legislation, the citizens of Hawaii will soon decide whether their Islands shall become our fiftieth State. In so doing, they will demonstrate anew to the world the vitality of the principles of freedom and self-determination–the principles upon which this Nation was founded 172 years ago.”

Hawaiians had long campaigned for full statehood, so when the referendum went to the polls on June 27 of the same year, Hawaiian voters supported statehood 17 to 1.

Since then, the islands have become a tourism mecca. In January 2013 alone, tourists in Hawaii spent $1.43 billion.

Congrats to David Daniel (@CNNLADavid) for correctly answering today’s trivia, even though it is clear by the question mark at the end of your tweet that you weren’t that confident.