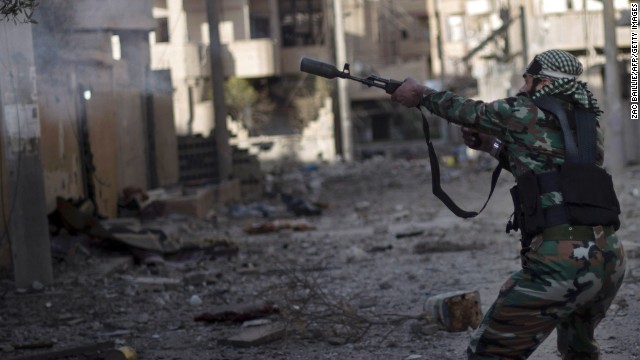 The New York Democrat previewed the legislation Sunday, saying in an interview it was the time for more substantial American investment in the rebels fighting to overthrow Syrian President Bashar al-Assad.

"I think the Free Syrian Army needs help," Engel said on ABC. "We know who they are. And I think it's time that we make that move."

In a statement Monday, Engel wrote the United States is "long past due to arm friendly rebels and turn the tide to allow for a more hopeful Syrian future."

"Ridding Syria of Assad will provide a strategic setback to Iran, which uses Syria as a pass-through to prop up their terrorist proxy Hezbollah in Lebanon," he wrote.

Gen. Martin Dempsey, the chairman of the Joint Chiefs of Staff, however, said distinguishing between the opposition forces would be difficult, as the situation has become increasingly unclear.

"The challenge with the opposition in Syria is that it is – it’s multilayered, multifaceted, and it’s kind of ubiquitous and it’s – meaning, spread throughout the country, pockets in some cases, intermingled in others," Dempsey said Monday at an event in Washington.

"I don’t think, at this point, I can – I can see a military option that would create an understandable outcome," he added.

Engel's bill would authorize Obama to provide approved members of the Syrian opposition with "restricted lethal military assistance," as well as develop a program to destroy chemical and biological weapons in Syria.

Last week, Syrian rebels claimed to CNN that hundreds of their fighters were being given sophisticated-weapons training organized and authorized by the United States at a camp in Jordan. A senior rebel spokesman said 300 fighters had already completed the course and crossed the border into Syria on Thursday.

The training was said to include the use of anti-tank and anti-aircraft weaponry, the latter aimed at the particularly vital part of the regime's military might, which has thus far kept rebels often in check.

Secretary of State John Kerry added Monday that the "United States does not stand in the way of other countries that have made a decision to provide arms" to the Syrian rebels.

Since Syrian rebels first began trying to oust Assad in March 2011, the United States has waded into the conflict incrementally. In December 2012, Obama said the U.S. government would recognize the leading Syrian opposition coalition, though stopped short of saying the U.S. would join other nations like Qatar in providing the rebels with weapons.

The U.S. has provided millions of dollars in funding and humanitarian aid to the Syrian opposition, and has pressed them to establish a leadership structure.