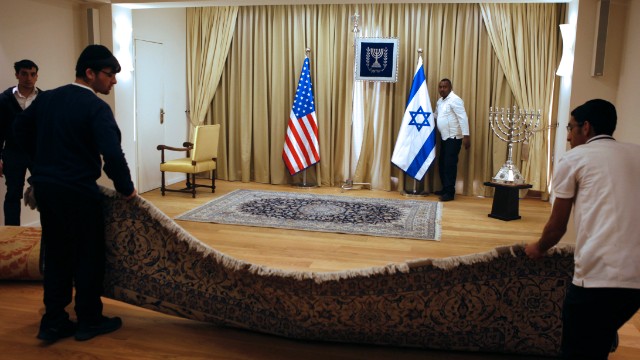 Washington (CNN) - As President Barack Obama makes his first visit to Israel since winning the White House more than four years ago, with anything but a warm relationship with Israeli leader Benjamin Netanyahu, a new national poll indicates that nearly half of all Americans consider Israel to be an ally of the United States, but the survey indicates a wide partisan divide.

And a CNN/ORC International poll also points out that two-thirds of Americans say that Israel and its Arab neighbors will never live in peace. And the public's divided on whether Washington should support Israel if it launches a pre-emptive strike on Iran's nuclear program.

According to the survey, 46% of those questioned say that Israel is an ally of the U.S., with 33% saying that the country's not an ally but friendly. Only 8% say Israel is unfriendly with 6% calling the country an enemy of the U.S.

"There is a large partisan divide in the U.S. over Israel," says CNN Polling Director Keating Holland. "Sixty-three percent of Republicans call Israel an ally of the U.S., compared to only 33 percent of Democrats. A plurality of Democrats think that Israel is friendly to the U.S.; only one in five think it is unfriendly or an enemy."

The poll's Tuesday release comes as the president flies to Israel, the first stop in a Middle East swing that also includes the West Bank and Jordan. Obama's relationship with Netanyahu has never been warm and the Israeli prime minister appeared to favor Republican challenger Mitt Romney in last year's presidential election.

The survey indicates that two-thirds of Americans say that Israel and the Arab nations will never be able to settle their differences and live in peace, with 32% more optimistic.

"One possible reason for that pessimism is the constant speculation that Israel may take matters in its own hands and attack Iranian nuclear facilities to prevent that country from developing nuclear weapons," adds Holland.

What should the U.S. do if that were to happen?

The new poll was conducted March 15-17 for CNN by ORC International, with 1,021 adult Americans questioned by telephone. The survey's overall sampling error is plus or minus three percentage points.