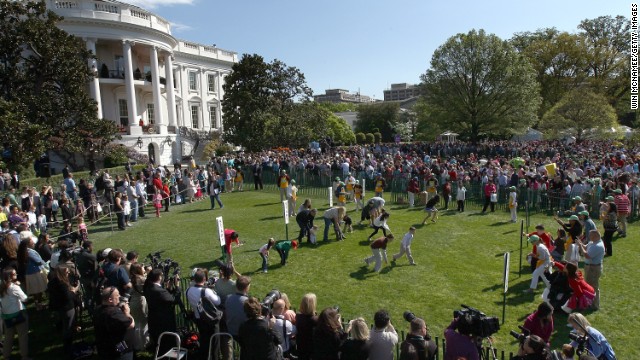 As for now, the event will go on as planned – though warnings have gone out to members of Congress and ticketholders that a partial government shutdown would cause the egg roll to be scrapped.

In a memo to lawmakers, who receive tickets to the egg roll, the White House notes that "by using these tickets, guests are acknowledging that this event is subject to cancellation due to funding uncertainty surrounding the Executive Office of the President and other federal agencies."

The memo adds that if the event is canceled, it would not be rescheduled.

"We have every expectation that the Easter Egg Roll will proceed as planned," he added later.

A partial government shutdown would occur if Congress fails to extend funding authorization by the March 27 deadline, something leaders from both parties have said they'd like to avoid.

The Easter Egg Roll – an annual event featuring games, music and the egg roll - is celebrating its 135th anniversary this year. It's slated to take place April 1.

The White House announced earlier this month it was suspending public tours through September 30 as a consequence of the forced spending cuts-known as the "sequester."

The move quickly sparked controversy, with some Republicans arguing the Obama administration was using the canceled tours as a political ploy to draw up negative reaction from the American public over the cuts.

The U.S. Secret Service told CNN that the plan will help the agency save $74,000 per week – or $2 million over the next seven months, which is the scheduled length of the ongoing forced budget cuts. That total covers the cost of paying 37 uniformed officers $50 an hour for 40 hours a week to secure the tour's route through the East Wing.

But that's just a fraction of the $84 million the Secret Service needs to cut from its $1.6 billion budget, according to the Office of Management and Budget. The officers normally assigned to the tours will be reassigned to other duties at the White House.