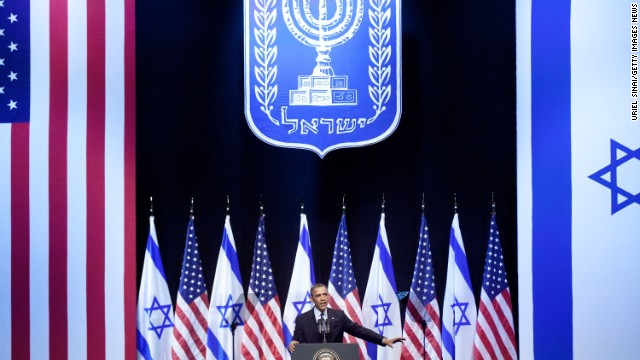 PEACE IS POSSIBLE: President Barack Obama attempted on Thursday to invigorate the stalled Middle East peace process, urging young Israelis to pressure their leaders to seek peace with Palestinians while acknowledging the Jewish state's historical right to exist and defend itself from continuing threats.

“Peace is possible,” Obama said at a speech in Jerusalem. “It is possible. I’m not saying it’s guaranteed. I can’t even say that it is more likely than not. But it is possible.” – Tom Cohen. John King and Jessica Yellin

GOVERNMENT SHUTDOWN UNLIKELY: House approves government funding bill… The House of Representatives easily approved legislation Thursday funding the government through the end of September and avoiding a partial federal shutdown, while also softening the blow of forced spending cuts. The measure, which passed the Senate on Wednesday, now goes to President Barack Obama to be signed into law. – Alan Silverleib

RYAN BUDGET PASSES… NARROWLY: The Republican-controlled House of Representatives passed GOP Rep, Paul Ryan's proposed Fiscal Year 2014 budget Thursday. It was a narrow 221 to 207 vote, with ten Republicans voting against the Ryan budget. The bill is believed to have no chance of clearing the Democratic-controlled Senate. – Alan Silverleib

OPPO RESEARCH: Romney campaign chief to lead new GOP research group… In the wake of an RNC report calling on the party to modernize its hobbled and outdated infrastructure, three Republicans are stepping into the research void to launch a conservative counterweight to American Bridge. The new GOP research outfit is called "America Rising," and it will be helmed by Romney's former campaign manager Matt Rhoades, who earned his stripes in politics as an opposition research specialist at the RNC. – Peter Hamby

What president won the “Most Nearly Perfect Male Figure Award” while in college?

Times have changed for President Barack Obama in the Middle East.

As a fresh-faced president in 2008, Obama was the toast of the region. By just winning the White House, it appeared that Obama completed something most presidents couldn't have done: receiving support from the streets of the West Bank, the Gaza Strip and Israel.

As CNN's Chief National Correspondent John King observers from the president’s trip to the region, the support Obama once enjoyed is long gone.

"In the early days of the Obama presidency the new American president inspired hope across the Arab world," King writes. "Now, there are posters and protests critical of the president, and some harsh words from everyday Palestinians."

"It takes only a few yards past the Hamas checkpoint to wonder whether you stepped through a time portal,” King writes. “There are carts drawn by donkeys and horses, and poverty that makes you cringe.

King continues: "In Gaza City, a billboard reminds you only fools get optimistic about prospects for peace here: It is a celebration of the Hamas military wing that is responsible for, among other things, rocket attacks in Israeli communities."

“Most aren't interested in talking politics,” King writes. “Those who will have mixed opinions of President Obama, and if nothing else voiced hope this trip would melt away some of the personal chill between the U.S. president and their prime minister.”

All of these perspectives contribute to one main point: the tenuous, almost fleeting atmosphere that is needed for Middle East peace.

Leading CNNPolitics: What was behind Reid's sidestep on assault weapons ban?
Depending on whom you ask, Senate Minority Leader Harry Reid's decision to scuttle a controversial assault weapons ban proposal from a broader Democrat-backed gun control package is either shrewd strategy or political cowardice. There's a little bit of truth in both perspectives, gun policy advocates say. – Halimah Abdullah

Leading Drudge: O Stirs It Up
Barack Obama experienced the sobering realities of re-engaging with the Middle East peace process on Thursday when the Palestinian leader, Mahmoud Abbas, openly challenged his line on Jewish settlements. Mr Obama said he had told Benjamin Netanyahu, Israel's prime minister, that settlement expansion in east Jerusalem and the West Bank on land the Palestinians want for a future state was not "constructive" or "appropriate". – Robert Tait for the Telegraph

Leading HuffPo: New Threat: Let's Play Debt Ceiling Chicken Again!
House Speaker John Boehner (R-Ohio) laid down a tough requirement for raising the debt ceiling Thursday, all but ensuring a reprise of the tense standoff two years ago that saw America's credit rating downgraded. Speaking at his regular news conference, Boehner said the only way the House would go along with raising the country's borrowing cap was if President Barack Obama and the Democrats came up with an equal amount in budget cuts. – Sabrina Siddiqui and Michael McAuliff

Leading Politico: Politicians and gay marriage: Profiles in calculation
When historians write the story of America’s cultural revolution on gay marriage, March of 2013 may well get its own chapter — the month when the political balance on this issue shifted unmistakably from risky to safe. But historians will surely also note that this was a movement in which the politicians, for the most part, were mere passengers along for the ride. With very few exceptions, elected officials remain profiles in caution and calculation, while activists and courts are the real engines of change. – Alexander Burns, Maggie Haberman and John F. Harris

Leading The New York Times: Obama Lays Out Case for Israel to Revive Peace Talks
In a carefully crafted address on Thursday that was enthusiastically welcomed by a youthful audience of Israelis, President Obama made his case for a future Israel at peace with the Palestinians. – Rick Gladstone

- The moment Twitter knew they made it -
TWITTER FOUNDER JACK DORSEY IN AN INTERVIEW WITH CNN'S JAKE TAPPER: “The moment for me was when I was watching the State of the Union after Obama was just elected President and the cameras were panning around to the congressmen and congresswomen and they all were like on their phones. And I was like 'what is going on, they're being rude, the President is speaking right now.' And I get a buzz in my pocket, I took out my phone and it's Sen. Claire McCaskill saying I'm watching the President give the State of the Union.”

- Christie wavers on gay therapy ban -
NEW JERSEY GOV. CHRIS CHRISTIE IN AN INTERVIEW WITH THE STAR-LEDGER: “I'm of two minds just on this stuff in general. Number one, I think there should be lots of deference given to parents on raising their children. I don't – this is a general philosophy, not to his bill – generally philosophically, on bills that restrict parents' ability to make decisions on how to care for their children, I'm generally a skeptic of those bills. Now, there can always be exceptions to those rules and this bill may be one of them.” LINK
http://www.nj.com/politics/index.ssf/2013/03/christie_undecided_on_ban_of_c.html#incart_river

Gut Check Full Service: A ban on so-called "gay conversion therapy" would make it illegal for a professional counselor to "engage in sexual orientation change efforts with a person under 18." Therapy methods vary, but are often times associated with fundamentalist Christian groups who oppose homosexuality. Major medical groups, including the American Academy of Pediatrics and the American Medical Association, oppose therapies that aim to treat homosexuality as a mental disorder. A state Senate committee approved the bill on Monday. – Kevin Liptak

- Because of Newtown parent's courage, Biden says there’s a chance for assault weapons ban -
VICE PRESIDENT JOE BIDEN TOLD SHOOTING VICTIMS AT A PRESS CONFERENCE IN NEW YORK CITY: “It takes an enormous amount of courage to be here. ... I don’t know how you do it but you do it. You do it. And you are one of the reasons why there is all these pieces of legislation passed through the judiciary committee and why we have a fighting chance.”

- Longing for Clinton -
HOUSE SPEAKER JOHN BOEHNER IN A SPEECH ON THE HOUSE FLOOR: “We have balanced the budget before – 1997 – Republicans in Congress working with a Democrat President Bill Clinton came together to put the plan that would in fact balance the budget and we did, and for four years had a budget surplus. The president has an opportunity during this critical debate to come forward and to help make this part of his legacy like it has become part of the Clinton legacy – working together on behalf of the American people to solve what we know is a crisis in our country.”

Obama heckled in the middle of his speech in Jerusalem. He responds: This is part of the lively debate that we talked about.

#Iran leader Khamenei: America has to demonstrate that talks are not a tactic to deceive public opinion.

Ah, March Madness. Or as the Northwestern basketball fan knows it, March.

In 2011, the NCAA paid a company named Intersport $17.2 million to relinquish its claim to the "March Madness" trademark

In 1940, while a student at the University of California, future President Ronald Reagan was voted “Most Nearly Perfect Male Figure” by the student body at Cal.

What notoriety came with the honor? According to the book, “Secret Lives of the U.S. Presidents,” Reagan was paid to pose “nearly naked” for art students “attempting to sculpt the human physique.”

Reagan, before becoming president, would become a well know actor with 57 movie credits to his name, according to his IMDB profile.