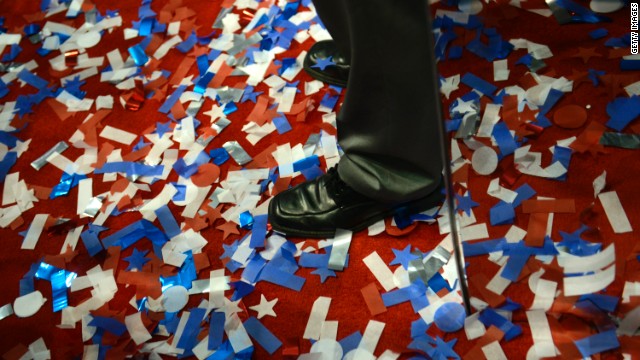 Overlooked in the aftermath of Mitt Romney's loss, however, was the fact that Democrats throttled Republicans in the critical practice of opposition research - the age-old tactic of gathering negative information about one's opponent and pushing it into public view through the press or through paid media.

The Obama campaign aggressively peddled damaging stories about Romney to reporters and ran an arsenal of negative TV ads early in the campaign that crippled the GOP nominee well before the fall election sprint.

But the Democrats' research efforts were buttressed by American Bridge 21st Century, a new outside group in 2012 that raised $17 million for the sole purpose of gathering dossiers on Republican candidates and tracking their every move throughout the campaign.

At its height during the campaign, American Bridge boasted 60 full-time staffers, including 20 trackers who trailed GOP candidates full-time with video cameras.

Republicans had nothing comparable on their side, other than the traditional research operations managed by the Republican National Committee and the Romney campaign.

American Bridge was just one of many voices in the Democratic onslaught against Romney, but Republican operatives took special note of their ability to scramble messaging in Senate and House races, causing fits for GOP candidates in key battleground states and wounding the party's ability to appeal to women and minority voters.

It was American Bridge media monitors who flagged Missouri Senate candidate Todd Akin's comments about "legitimate rape" on a local television program, and it was an American Bridge tracker who caught Iowa Rep. Steve King on video comparing illegal immigrants to dogs.

Now, in the wake of an RNC report calling on the party to modernize its hobbled and outdated infrastructure, three Republicans are stepping into the research void to launch a conservative counterweight to American Bridge.

The new GOP research outfit is called "America Rising," and it will be helmed by Romney's former campaign manager Matt Rhoades, who earned his stripes in politics as an opposition research specialist at the RNC.

Rhoades will be joined in the venture by two of Washington's leading young media strategists, Tim Miller and Joe Pounder, both of whom recently left the RNC's communications shop.

The organization plans to immediately begin training its sights on potential 2016 Democratic presidential candidates like Hillary Clinton, New York Gov. Andrew Cuomo and Maryland Gov. Martin O'Malley, along with focusing on Senate, House and gubernatorial candidates in the near term.

"We plan to start this enterprise because so many Republicans seem to agree that there is a need on our side of the aisle for an entity that is focused on solely holding Democrats accountable for their actions and records using research, candidate tracking, rapid response and digital tools," Rhoades told CNN in a statement.

The RNC's so-called "autopsy" report released last week, which studied the party's failings during last year's campaign, called for a "well-funded" research and video tracking organization that "does nothing but post inappropriate Democrat utterances and act as a clearinghouse for information on Democrats."

America Rising, which bills itself as "a permanent research infrastructure" for the Republican Party and conservative organizations, would seem to fill that space.

The group is promising a more sophisticated online infrastructure than American Bridge or any other research entity in politics, though the group did not provide details on what that may look like.

Rhoades, Miller and Pounder are also hoping to use America Rising as a hub to develop best practices for information-sharing among Republican groups and committees. Part of their mission includes training up a farm team of younger communication strategists who are fluent in new media and rapid response tactics.

The group plans to organize in two parts. As a super PAC, it will focus on digital campaigns and placing negative stories about Democrats in the news media. It does not plan to run television ads.

A separate wing of the group will incorporate as a limited liability company (LLC), which can coordinate directly with campaigns and political committees by sharing video and resources. On the legal side, the group is being advised by Republican super-lawyer Ben Ginsberg.

As for the RNC, which has traditionally served as the party's national clearinghouse for opposition research, spokeswoman Kirsten Kukowski said the committee is "excited about the efforts of groups like America Rising that will further strengthen the future of the Republican Party."

She also said the RNC is expanding its research teams for the 2014 and 2016 cycles.