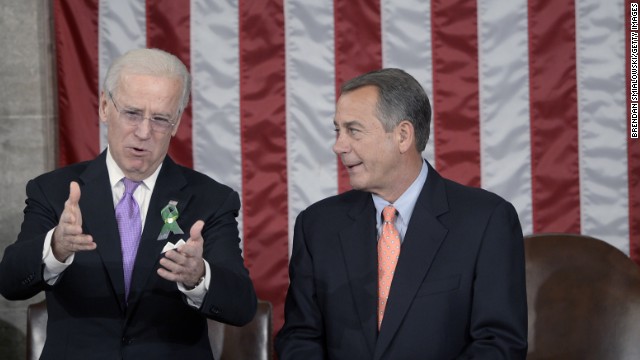 (CNN) - Vice President Joe Biden's meeting with House Democrats on Saturday was nothing of the "charm offensive" that brought his boss to Capitol Hill earlier this month.

Instead, the vice president chided congressional Republicans, claiming negotiating with them was nearly impossible.

Despite what he called the "decisive victory" Democrats won in November, Biden said of the Republicans it is "quite clear they didn't get the message" - or worse yet, "they got the message and they don't think it matters."

"The country's ready to move and we have a House of Representatives that's in the way right now," he said, according to the one pool reporter that the White House allowed into the event.

After months of deadlock and missed deadlines to resolve government spending matters, Democrats and Republicans on Capitol Hill agreed to a continuing resolution this week and avoided the prospect of a government shutdown next week.

That deal keeps in place the $85 billion in forced spending cuts, or sequester, which triggered March 1 after the two parties couldn't break their gridlock. Biden was involved in the December fiscal cliff negotiations that pushed sequestration back from January to March.

On five occasions, Biden said leaders in the House - which is controlled by Republicans - called him days or even hours after he had sat down for negotiations with them and they said, "What we agreed to, Joe, we can't do."

"The reason this is so dysfunctional now - with whom do you make a deal? With whom do you speak to get something done?" he said. "There is nobody you can sit across the table from and shake hands, make a deal with."

Biden spoke at the Democratic Congressional Campaign Committee issues conference in New York, and promised those who support an issue he has campaigned for personally would see support from the party and others.

"The number-one thing we can do to improve gun safety is to get some of this common sense stuff done," he said, going on to specifically reference background checks. "Why the hell we can't show the courage by standing up and doing what the American people want us to do?"

Biden promised Democrats from districts where gun control is a tough issue would see help from advocates like New York Mayor Michael Bloomberg. Biden and the mayor were joined by families connected to the Newtown, Connecticut, school shooting on Thursday in New York, and spoke out in favor of background checks. Other measures such as a ban on assault weapons do not currently have enough support in either chamber to reach the president's desk.

Biden assured the lawmakers on Saturday that Bloomberg is ready to spend "a great deal of his own money" on the issue, according to the pool report.

Criticizing Republicans in front of Democrats, who have a majority in the Senate but lost the House in 2010, isn't a challenge.