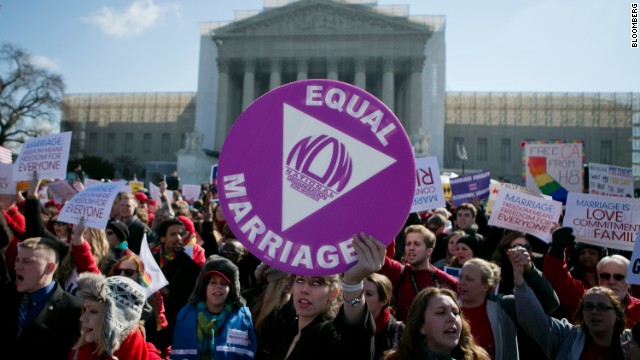 DEEPLY DIVIDED: As partisans argued outside the U.S. Supreme Court over same-sex marriage - either hoping for or dreading a landmark decision - justices inside seemed reluctant Tuesday to extend a sweeping constitutional right for gays and lesbian to wed in all 50 states. In the first of two days of hearings on cases that have the potential to fundamentally alter how American law treats marriage, Justice Anthony Kennedy - considered the likely deciding vote on the divided court - questioned whether justices should even be hearing the issue. – Bill Mears and Michael Pearson

KENNEDY’S CONTROL: If there was any doubt before, the Tuesday arguments showed this is Justice Anthony Kennedy's court, and he is likely to be the controlling or "swing" vote for however the court decides the tricky issues. Four more liberal justices appeared at least open to the idea that same-sex marriage should be allowed in California. Three more conservative justices seemed to take a more "traditional" view– that marriage is between one man and one woman. Justice Clarence Thomas, who does not speak at arguments seems likely to agree. That appears to leave the 76-year-old moderate conservative Kennedy in the middle, perhaps ready to offer a compromise view. – Bill Mears

ON THE RISE: Home prices continued their recovery, rising 8.1% in January, although a separate report showed a slight slowdown in new-home sales. “This marks the highest increase since the housing bubble burst,” said David Blitzer, chairman of the index committee at S&P Dow Jones Indices. – Chris Isidore

TRAIL TRIVIA
(Answer below)
On this day in 2000, President Bill Clinton met with Syrian President Hafez al-Assad, the father of the current and embattled Syrian leader, Bashar al-Assad. Why did they meet?

With each passing election, Southern Democrats are becoming a thing of the past.

The last Democrat to win a majority of the South was Georgia’s Jimmy Carter in 1976. There are only four southern Democrats in the Senate: Mary Landrieu of Louisiana, Mark Pryor of Arkansas, Ben Nelson of Florida and Kay Hagan of North Carolina. And eight of the 10 southern states have Republican governors.

That makes Arkansas Democratic Gov. Mike Beebe a rare breed – and possibly a model for the future.

Beebe differs markedly with the national Democratic Party. In the past six years, he vetoed abortion bans, trimmed the state budget and he has reiterated his opposition to same-sex marriage. Beebe has also expanded education funding, advocated getting Medicaid expanded in his state and has said he would vote for a tax increase, as long as the money goes to increasing the transportation budget.

On Monday, Beebe vetoed a bill that would have required residents to produce identification to be able to cast a ballot. Beebe said he vetoed the bill because of its cost, writing that the $300,000 price tag made it an “unnecessary measure that would negatively impact one of our most precious rights as citizens.”

Both chambers of Arkansas legislature passed the voter ID bill and could override the governor's veto with simple majority votes in both the House and Senate.

In nearly eight years as governor, Beebe has picked his spots to side with both political parties. That moderation got him reelected by a 31-point margin in 2010 and landed him among the most popular governors in the nation. In a 2012 poll, almost 65% of people in his state approved of his leadership.

Beebe is term-limited in 2014 and since all of the Arkansas congressional seats went red in the 2012 election - the first time in the state's history - it is widely expected that the governor’s mansion will follow suit and fall to the GOP in 2014.

If Beebe lived in a reliably Democratic state, his legacy would likely be his legislative accomplishments. As a dying breed in the South, though, it is more likely that his legacy will be the model he sets for future southern Democrats.

Correction: An earlier update of this story said Gov. Mike Beebe had approved restrictive abortion laws. That is incorrect and we regret the mistake.

SOCIAL WATCH: Scroll through your Facebook newsfeed today and there is a good chance you will be seeing red.

A simple red equal sign, a variation of the Human Rights Campaign’s traditionally blue and yellow logo, has dominated social media. In total, according to Fred Saiz, vice president of communication for the gay-rights organization, the image has been seen by 10 million people on Facebook alone.

Leading CNNPolitics: No Full Monty for Prince Harry and Chris Christie
His last visit to the United States ended with a nude romp around a hotel room. But Britain's Prince Harry won't be disrobing during his upcoming tour of New Jersey if the state's governor has any say in it. “He wants to come and see the destruction himself, firsthand,” Christie said in a radio interview with New Jersey 101.5. “He wants to be helpful. And I am going to be spending the entire day with Prince Harry. And believe me, nobody's going to get naked if I'm spending the entire day with Prince Harry.” – Kevin Liptak

Leading Drudge: A Vacation A Month
In the first three months of the year, members of the first family have been on three vacations, averaging a vacation a month. And now it's being reported that the first daughters are on a spring break vacation in the Bahamas. – Daniel Halper

Leading HuffPo: All Eyes On 8
Justice Anthony Kennedy on Tuesday called the prospect of same-sex marriage “unchartered waters” during oral arguments before the U.S. Supreme Court on Proposition 8, California’s gay marriage ban. There’s either a “wonderful destination or a cliff in it,” Kennedy said. – Mike Sacks and Ryan J. Reilly

Leading Politico: Can gay marriage survive SCOTUS loss?
Under the worst-case scenario for gay rights groups, the court could uphold both California’s Proposition 8 and the federal law Defense of Marriage Act — extending no new rights to gay couples looking to marry or take advantage of federal benefits extended to opposite-sex couples. But gay rights activists say this wouldn’t have the impact of Plessy v. Ferguson — the 1896 decision that left “separate but equal” the law of the land until Brown v. Board of Education six decades later. – Josh Gerstein

Leading The New York Times: Justices Hint at Fears of Acting Too Quickly on Gay Marriage
As the Supreme Court began hearing arguments on Tuesday in a challenge to California’s same-sex marriage ban, some justices wondered aloud if the court had moved too fast in taking on the case. – Adam Liptak and Scott Shane

- After arguments, lawyers discuss case on the steps of the court -
THEODORE OLSON, THE ATTORNEY ARGUING AGAINST PROPOSITION 8: “It is so valuable to so many of our citizens to be treated equally and with dignity, and as David said, it's one of the major - maybe the major - final civil rights battle that we're fighting in this country. And it is so important to our values as Americans that it be decided in the right way.”
CHARLES COOPER, THE ATTORNEY ARGUING FOR PROPOSITION 8: “The parties and their lawyers have now litigated this case for almost four years, and finally to this point, the case as you have seen was presented to the court, the court asked some penetrating, measured questions of both sides, and now it's in the hands of the court. So we're looking forward to hopefully a prompt response. As I said, this is a difficult, controversial issue.”

- Obama being kept apprised of SCOTUS arguments -
PRESS SECRETARY JAY CARNEY AT THE WHITE HOUSE PRESS BRIEFING: “Senior adviser Valerie Jarrett was there. White House Counsel Kathy Ruemmler, as well as an associate counsel, Kathleen Hartnett, were in attendance. The president has been updated on the arguments.”

- Priebus: No ‘Old Testament heretics’ from GOP on same-sex marriage -
REPUBLICAN NATIONAL COMMITTEE CHAIRMAN REINCE PRIEBUS IN AN INTERVIEW WITH USA TODAY’S SUSAN PAGE: “My position is that marriage is between a man and a woman, but my other position is also that you treat people with dignity and respect and love and grace and so I think that they’re all compatible with each other. I don’t believe we need to act like, you know, Old Testament heretics either.”

- Paul, Lee and Cruz threaten filibuster for gun legislation -
REPUBLICAN SENS. RAND PAUL, MIKE LEE AND TED CRUZ IN A LETTER TO SENATE MAJORITY LEADER HARRY REID: “We, the undersigned, intend to oppose any legislation that would infringe on the American people’s constitutional right to bear arms, or on their ability to exercise this right without being subjected to government surveillance. … We will oppose the motion to proceed to any legislation that will serve as a vehicle for any additional gun restrictions.”

In an effort to rekindle peace talks between Syria and Israel, Clinton and al-Assad met in Geneva on March 26, 2000.

Clinton was accompanied by Secretary of State Madeleine Albright as well as peace mediator in the Middle East Dennis Ross and National Security Adviser Sandy Berger. Al-Assad was joined by Foreign Minister Farouk Ashira as well as a team of Syrian security and technical experts.

The meetings came near the end of the Clinton presidency and were widely considered a failure because no peace was reached between the bitterly divided countries.

Thirteen years later, Syria is embroiled in a deadly civil war and the United States has called for Bashar al-Assad to leave the country.