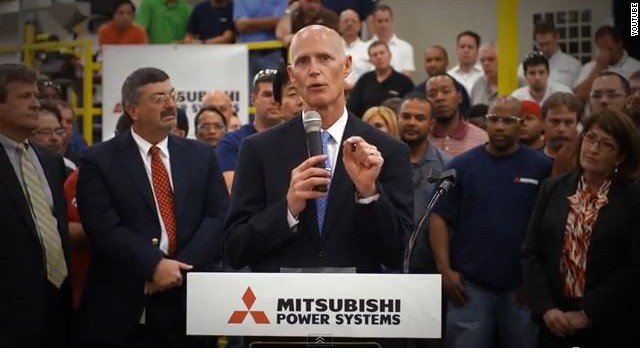 The web ad, made by "Let's Get to Work," will run indefinitely on Florida news websites, according (Republican) sources in the Sunshine State. And given its high-quality production and nearly-two minute length, it could easily be turned into a television ad or two.

Scott hasn't announced that he's running for a second term, but he's up for re-election in 2014.

In the video, released Monday, the governor is seen speaking at a Mitsubishi Power Systems plant, talking about the economy's improvement in the state. Since taking office in January 2011, the unemployment level in Florida has dropped from 10.9% to 7.8%.

"Florida's not a place just for vacationers anymore, now it's a place where you can come and work," a worker in the ad says.

Despite lower unemployment rates, Scott's approval ratings have struggled to top 41% since May 2011, according to Quinnipiac University polls. His most recent approval rate was 36% in a survey released March 20.

The same survey indicated that only 32% of voters believe Scott deserves re-election. And former Gov. Charlie Crist, who served as a Republican but is now a Democrat, would topple Scott in a hypothetical gubernatorial matchup, 50%-34%, according to the poll.

Scott made headlines when he recently decided to endorse the Medicaid expansion from President Barack Obama's health care reform–a law he vehemently opposed in his first election bid. However, a GOP-controlled Senate panel in the state voted it down.

The governor also came under criticism for Florida's election laws and procedures last year. The state received wide attention for its long Election Day lines and delayed voting results. And in June, the Justice Department filed a lawsuit that sought to stop the state of Florida from purging voters from registration rolls.

Scott, however, contended at the time that the move was necessary to remove the names of non-citizens from the lists, and polls showed that a majority of Florida voters approved of the measure.