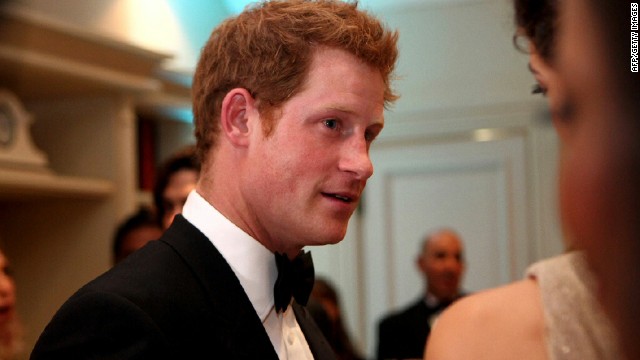 No Full Monty for Prince Harry and Chris Christie

(CNN) – His last visit to the United States ended with a nude romp around a hotel room. But Britain's Prince Harry won't be disrobing during his upcoming tour of New Jersey if the state's governor has any say in it.

That's a less-than-subtle reference to Harry's last visit to the United States, when photographs of him cavorting naked in a Las Vegas hotel room were splashed on newspaper front pages around the world. The incident came just weeks before Harry deployed with the 662 Squadron, 3 Regiment Army Air Corps to Afghanistan.

Harry later said he had "probably let myself down, I let my family down, I let other people down" with the nude photos.

His upcoming trip to the States will largely focus on supporting causes related to injured veterans. In Washington he'll visit an exhibit on Capitol Hill related to clearing landmines, which was a cause his mother Princess Diana also championed.

In Colorado Springs Prince Harry will attend events at the Warrior Games, which are held for injured servicemen and women.