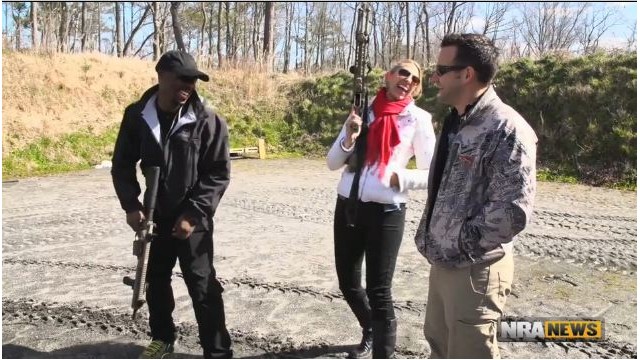 (CNN) - The National Rifle Association introduced new "commentators" for its news website, where a trio of young adult gun owners aim to debunk what they consider common myths and misunderstandings about firearms.

In a highly-produced video segment released Monday on NRA News and perhaps aimed to break stereotypes of gun owners, the organization showcases a blogger who writes about guns for women, a former Navy SEAL, and an "urban gun enthusiast."

The new video is interwoven with footage of the three shooting at a gun range and talking about their passion for educating people on guns. A trendy, modern beat can be heard under visuals of the personalities shooting different types firearms, with shells and casings discharging in slow motion.

The new video in particular takes a swipe at "politicians, media elites and celebrity puppets" for being what they describe as ignorant of guns and proper terminology.

"They have no idea what the difference is between a shotgun and an AR-15, and then they think AR-15s are fully automatic, which is completely false," argues Natalie Foster, who runs the website "A Girl's Guide to Guns."

A number of celebrities have indeed used their platform to call for more gun control. Dozens of A-listers took part in a December ad for Mayors Against Illegal Guns, calling for a plan against gun violence.

On Monday, actor Jim Carrey released a parody video on the comedy website "Funny or Die," in which Carrey mocks Charlton Heston's declaration that gun control advocates would have to pry his firearms "from my cold, dead hands." The late actor and former NRA president made the statement in a 2000 speech to NRA members.

Wearing a New York Yankees hat, another NRA commentator Colion Noir, the "urban gun enthusiast," praises the practice of shooting as a peaceful and tranquil experience.

"There is something about going out into the middle of nowhere that is so awe-inspiring, so relaxing and you hear nothing except the sound of a gun going off," he says. Noir, who joined NRA News slightly earlier than the other two, says he was not pro-guns until he went to a gun range for the first time.

Dom Raso, the third personality and former Navy SEAL, talks about his frustration with some people perceiving guns as nothing but lethal weapons.

"The killing machine is here," Raso says, pointing to his head. "It's not in your hand."

He also takes issue with Vice President Joe Biden, the administration's leading voice on the push for tighter gun laws. President Barack Obama and Biden have actively advocated for a ban on semiautomatic rifles modeled after military-style weapons, as well as a limit to magazine capacities.

Biden drew criticism for advising in a Facebook town hall to use a shotgun and shoot twice in the air as a way to fend off intruders. Critics argue that's simply a way to waste ammunition.

"It's ridiculous to hear our vice president trying to tell me or anybody else what they should be doing to defend their home, period," Raso says in the video.

The video comes days after Senate Majority Leader Harry Reid formally introduced gun legislation to expand the background check system and create tougher laws for gun trafficking. The powerful NRA has been fiercely opposed to any restrictions on current gun laws and Washington is gearing up for a showdown when the Senate returns for debate on the bill in two weeks.