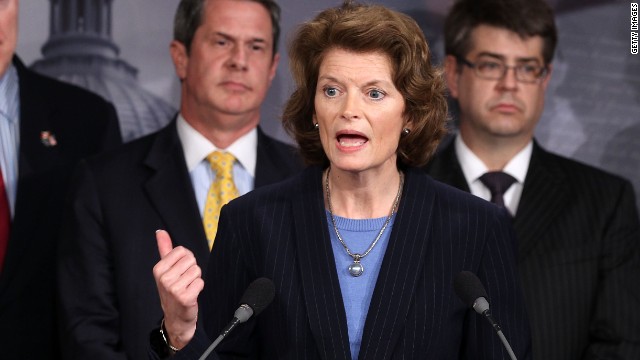 Her comments come nearly two weeks after Sen. Rob Portman of Ohio became the only sitting Republican senator to endorse same-sex marriage. If Murkowski does in fact have a change of heart, she would become the second.

Meanwhile, a small swarm of Democrats in the Senate voiced support for the issue earlier this week as the Supreme Court heard oral arguments on cases involving the right for same-sex couples to legally wed.

"I think it's important to acknowledge that there is a change afoot in this country in terms of how marriage is viewed," Murkowski said Wednesday after addressing a chamber of commerce event in an Anchorage suburb, according to the Chugiak-Eagle River Star.

She spoke further on the topic with Alaska Public Media.

"I think you are seeing a change in attitude, a change in tolerance," she said. "And an acceptance that what marriage should truly be about is a lasting, loving committed relationship with respect to the individual."

The senator, now in her third term, said she'll make her decision after talking to constituents. In 1998, Alaska became one of the first of now-29 states to pass an amendment to its constitution defining marriage as between a man and a woman.

Pressed further on her stance, she said it was "evolving," the newspaper reported.

"The term 'evolving view' has been perhaps overused, but I think it is an appropriate term for me to use," she said.

President Barack Obama, who did not personally support same-sex marriage as a 2008 presidential candidate, famously used the term to describe his shifting stance in October 2010. Less than two years later–in May 2012-he announced his full support.

As for why Murkowski is considering a change in position, she pointed to her two young sons, who she says give her puzzled looks when she asks them for their views on same-sex marriage.

"(They) kinda give me one of those looks like, 'Gosh mom, why are you even asking that question?'," she said.

Her office in Washington confirmed her comments reported by the local media outlets, but added she has no plans to make any announcements on the issue soon.

Asked how long the senator has been changing in her views, her communications director, Matthew Felling, said "she's been watching the ongoing conversation across Alaska and the nation."

Republican Rep. Don Young, the state's sole U.S. congressman, personally believes marriage should be between a man and a woman, but ultimately thinks it should be decided by the states, according to a statement his office provided the Alaska Dispatch this week.