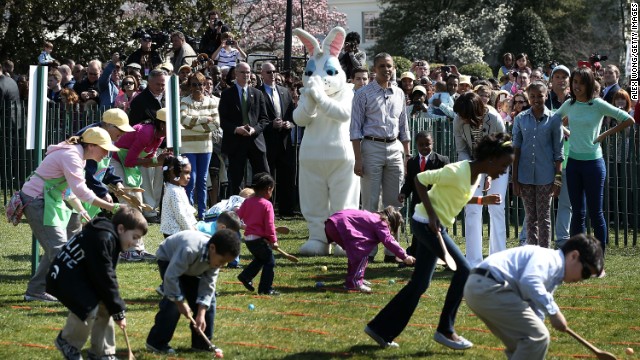 (CNN) - With viral-video star "Kid President," American Idol's Jessica Sanchez, and the Easter Bunny at their side, the first family kicked off the 135th Easter Egg Roll at the White House Monday.

"It's great to have everyone here this morning. We are so excited," first lady Michelle Obama said from the White House balcony. "The Easter Egg Roll is the biggest event that we have here on the South Lawn of the White House each year."

The president hit several activities along the South Lawn, though he may have wished he skipped the basketball court. There, the hoopster-in-chief missed more than a dozen shots before one finally sunk. In all, he went 2-22 on the day.

“Oh, man," a frustrated Obama said as his shots kept hitting the rim. "Come on. Come on. Did you see that?"

After several missed attempts, the president handed the ball to a boy who promptly made a layup.

At Monday's White House press briefing, Obama's press secretary Jay Carney said the president "doesn’t get to practice probably as much as he’d like to."

Obama also made stops at the nearby tennis court, where he had better luck returning serves from lucky children who were chosen to participate.

"See how you can handle the lob," the president said as he returned one shot (the opposing child missed the return).

The president also stopped at the Easter egg roll itself, where he tried to console one young child who had tripped during the race.

"Shake it off," he told five year old Donovan as he gave him a hug.

The first lady and daughters Sasha and Malia also joined in the fun. Mrs. Obama first stopped at a cooking station with Chef Anne Burrell and NBC's Al Roker. Burell demonstrated how to make several healthy dishes, the recipes of which can be found on the first lady's website, LetsMove.gov.

Later Sasha and Malia read "Brown Bear, Brown Bear, What Do You See?" as Mrs. Obama looked on. That was followed by the first lady's own reading of "Cloudy With a Chance of Meatballs.”

The first family returned to the White House about an hour after they appeared. The event will continue all day.

- CNN's Alex Mooney and Becky Brittain contributed to this report