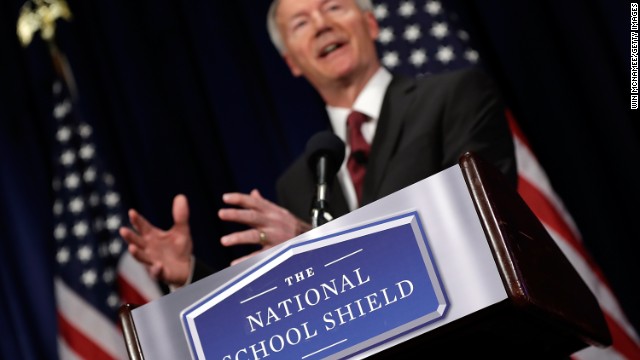 Arming school personnel to protect children from gun violence is what caught our eye, not because it is a new concept, but rather it is now a formal recommendation. And it is very controversial.

A commission funded by the National Rifle Association today proposed training and arming school personnel to help decrease tragedies such as the December massacre in Newtown, Connecticut.

"Response time is critical," former Rep. Asa Hutchinson, R-Arkansas, said at a news conference revealing the plan. "If you have the firearms in the presence of someone in the school, it will reduce the response time and save lives.”

Hutchinson was appointed by the NRA to lead the National School Shield Task Force in the days following the Newtown murders.

It was immediately dismissed by Chicago Mayor Rahm Emanuel, a Democrat who served in the House and as President Barack Obama’s chief of staff.

“That is not what schools are for and that's not where you want the time and training for principals and teachers,” Emanuel said in an interview on “The Lead with Jake Tapper.” “You want that on the education of our children. There is a whole host of things to do different as it relates to safety in schools, but training teachers and principals on use of handguns is not one of them.”

Still, Hutchinson stood by the recommendations outlined in his report and criticized New York Mayor Michael Bloomberg, who has dug deep into his own pockets to fund a campaign advocating for stricter gun laws, in an interview on “The Situation Room with Wolf Blitzer.”

“I don’t believe that further gun control restrictions are the answer to our challenge of violence in our society,” Hutchinson said. “I think the answer is – particularly when it comes to our schools – is having better investment in safety. I wish Mayor Bloomberg would take his tens of millions of dollars he’s advocating in his campaign for gun control and put that money into school safety programs. I think it would make a real difference for our children’s future.”

The debate over new gun laws is just beginning and today’s recommendation about arming school personnel is just the latest discussion point that Congress and the American public will need to address.

Leading CNNPolitics: Runoff is second test in shamed governor’s political comeback
Call it the next hurdle in Mark Sanford's political redemption tour. The former South Carolina governor, whose political career was sidetracked thanks to a well-publicized affair, faces a Republican primary run-off for his old congressional seat on Tuesday. – Paul Steinhauser and Kevin Liptak

Leading Drudge: UN Goes for Guns
The United Nations General Assembly on Tuesday signed off on a sweeping, first-of-its-kind treaty to regulate the international arms trade, brushing aside worries from U.S. gun rights advocates that the pact could lead to a national firearms registry and disrupt the American gun market.– David Sherfinski

Leading HuffPo: Obama Hits Wealthy on the Runway with Air Traffic Control Tower Cuts
For the most part, the super wealthy are not directly affected by cuts to government services. Private security guards, private schools and private money have a way of blunting the impact of austerity. But the Obama administration is hitting the rich in one place that hurts - on the runway.– Ryan Grim and Sabrina Siddiqui

Leading Politico: What Marco Rubio is thinking
Immigration reform is alive and kicking because Sen. Marco Rubio was there at conception. It will likely die if Rubio bolts in the end. The possibility that Rubio could walk away, more than any other dynamic, is shaping the final details of new immigration laws, participants tell us. – Mike Allen and Jim VandeHei

Leading The New York Times: Senator’s Bid to Fix Immigration Starts in His Backyard
A five-minute lunch break at Chick-fil-A was Sen. Lindsey Graham’s only unscheduled stop of the day. But he had barely stepped inside the fast food restaurant here last week before a constituent was upon him, urging Mr. Graham, a South Carolina Republican, to relay a message to his colleagues in Washington: “Make ’em understand the word ‘illegal,’ ” said Stephen Lewis, 72, a retired Marine. “If you’re not here legal, be punished or thrown out of this country for it.” – Ashley Parker

On this day in 1917, President Woodrow Wilson made a joint address to Congress. What was the subject?

- Obama announces new plan for brain research –
PRESIDENT BARACK OBAMA AT THE WHITE HOUSE: “As humans, we can identify galaxies light years away; we can study particles smaller than an atom. But we still haven’t unlocked the mystery of the three pounds of matter that sits between our ears. But today, scientists possess the capability to study individual neurons and figure out the main functions of certain areas of the brain.”

- Snowe on Obama’s ‘charm offensive’ -
FORMER GOP SEN. OLYMPIA SNOWE ON ‘STARTING POINT’: “The lines of communication have to stay open all the time. It's just not having a sporadic event or sporadic meeting. You have to build that relationship, working on these legislative initiatives, and the range of issues and the scope of issues, that need to be addressed in this Congress. They have to work side by side. You can't handle a legislative branch working in a parallel universe.”

- Newtown dad praises NRA’s efforts –
MIKE MATTIOLI AT THE NATIONAL PRESS CLUB: “I applaud you for doing this and I think it's important that if you look at what took place in Sandy Hook, mental health is a huge component of that. You need to focus resources, attention, research, that needs a big component of this. We need the kids to be safe.”

- Cummings on what drives him to push for gun control -
REP. ELIJAH CUMMINGS, D-MARYLAND, PRIOR TO THE NRA EVENT: “I always try to keep my eye on the prize. My prize is to make a difference, my prize is when I think about the young man who's laying here dead with a bullet hole in his ear, and was shot in the side of his head, that's my passion, and I believe that he would say if he could speak, 'Cummings you don't have the right to remain silent, you must never give up, you must never be so frustrated that you give up.'”

- Did the first lady reach for popcorn? –
MICHELLE OBAMA AT THE WHITE HOUSE SCREENING OF ‘42’: “Everybody in this country needs to watch this movie. And I can say with all sincerity that it was truly powerful for us. I don't know about you, but we walked away from that just visibly, physically moved by the experience of the movie, of the story.”

After a spike of attacks on shipping lanes in the Atlantic during February and March of 1917, President Woodrow Wilson urged Congress on April 2 to formally declare war on Germany.

“It is a fearful thing to lead this great peaceful people into war, into the most terrible and disastrous of all wars, civilization itself seeming to be in the balance,” Wilson told lawmakers, noting that the United States had “no selfish ends to serve.”

“We desire no conquest, no dominion,” Wilson said. “We seek no indemnities for ourselves, no material compensation for the sacrifices we shall freely make. We are but one of the champions of the rights of mankind. We shall be satisfied when those rights have been made as secure as the faith and the freedom of nations can make them.”

Two days later, the Senate passed a war declaration 82-6. The House followed suit on April 6, making the U.S. entrance into the war official.

Congrats to @RVAREGal for guessing the correct answer to today’s trivia question.