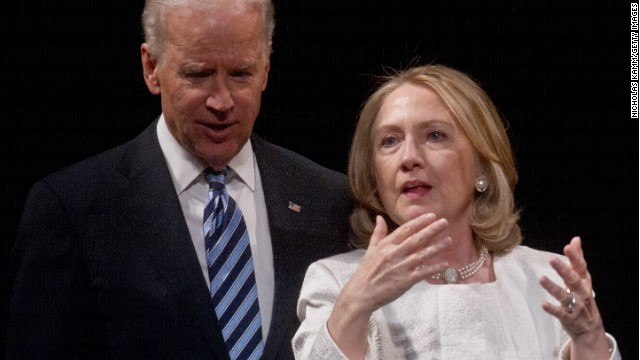 Washington (CNN) - She spent most of the past twenty years as one of the nation's most public faces, and after two months out of the spotlight Hillary Clinton picked up right where she left off.

The former first lady, senator and secretary of state made one of her first public appearances after leaving the State Department Tuesday evening at a ceremony honoring, among others, a former colleague: Melanne Verveer, who acted as Clinton's chief of staff during her years as first lady.

The event – the Vital Voices Global Awards ceremony at Washington's Kennedy Center - is one Clinton has attended in years past, and grew out of the Vital Voices Democracy Initiative that Clinton founded in 1997.

The event honored women leaders in developing nations like Cambodia, Brazil and Somalia who sought to make life better for women - issues that have been at the top of Clinton's agenda for years.

“I was determined to weave this perspective into the fabric of American foreign policy,” Clinton said of her time as secretary of state, adding later that she intended to continue that commitment outside government.

She emerged looking refreshed, her hair shorter, and without the thick-lensed glasses she wore following her fall and concussion during her last months in the Obama administration.

Also on stage Tuesday: Vice President Joe Biden, who many speculate could be a rival for Clinton in the 2016 Democratic presidential primary. Biden was presenting an award to a trio of brothers from India who fight human trafficking.

Biden, who like Clinton was warmly received by the friendly crowd, said there was "no woman like Hillary Clinton."

Outside, a band of Hillary Clinton supporters seemed to agree with Biden. Waving "Hillary 2016" signs, the hundred or so backers waved and cheered as people arrived for the event.

Since stepping down as secretary of state in February, Clinton has mostly remained true to the vow she made beforehand to lead a quiet life as a private citizen. She made headlines in March when she officially endorsed same-sex marriage in a web video, though her announcement didn't come as a major surprise.

Her reentry into public speeches will also include a speech at the Women in the World summit at New York City's Lincoln Center. She'll make remarks just before a panel discussion led by her daughter Chelsea.

The summit focuses on women and global issues, and it's another event Clinton has attended in the past. The other high-profile participants include Oprah Winfrey.

"People are treating this as a kind of coming out for her," said Democratic strategist and CNN contributor Hilary Rosen, who's friendship with Clinton goes back years. "If that's the case, it is a good thing that she is doing so on issue which she is so passionate about!"

The first paid engagement that's been announced for Clinton is a speech at the National Multi Housing Council in Dallas, slated for April 24. A Democratic source close to Clinton who confirmed her speech in Dallas did not disclose how much Clinton is being paid for her attendance.

Shortly after leaving her State Department post, Clinton signed on with the Harry Walker Agency as her representative for speaking engagements. She is expected to be a highly sought speaker who could earn in the six-figure range per appearance.

Clinton is also working a book about her time at the State Department and deciding how she'll pursue her interest in furthering the advancement of women and girls, the source said.

Another Clinton speech will come in June at the Economic Club of Grand Rapids.

The slate of events come amid continued speculation on Clinton's intentions in the 2016 presidential race. Public opinion polls indicate Clinton would enter the race with a strong advantage - a Quinnipiac University survey released in March, for example, indicated that Clinton would topple two of Florida's popular sons, former Gov. Jeb Bush and Sen. Marco Rubio. She also comes out on top in another swing state – Pennsylvania – according to a poll released last month.

Her schedule puts her on something of a collision course with other potential White House contenders. Her April speech in Dallas will put her in town on the same day as Bush, who is set to speak across town on immigration and his new book.

At least publicly, Clinton has remained undecided on a run.

"I am out of politics right now," she told CNN's Elise Labott and Jill Dougherty in January. "And I don't know everything I'll be doing. I'll be working on behalf of women and girls, I'll be hopefully writing and speaking. Those are the things that I'm planning to do right now."

CNN's Steve Brusk and Paul Steinhauser contributed to this report.