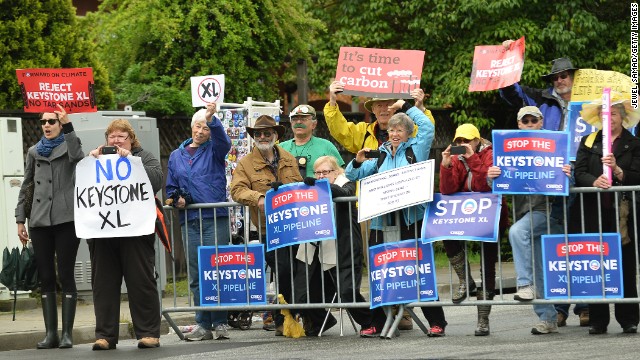 Activists make voices heard inside and outside Obama's fundraisers

Although he didn’t mention Keystone specifically in his remarks at Ann and Gordon Getty’s Pacific Heights mansion on Wednesday night, Obama did allude to the tricky balance between protecting the environment and spurring economic growth.

“If we’re going to deal with climate change in a serious way, then we’ve got to have folks in Congress – even when it’s not politically convenient – to talk about it and advocate for it, and break out of this notion that somehow there’s a contradiction between us being good stewards of the environment and us growing this economy. They are not a contradiction,” Obama told a crowd of 75 people at the $32,400-a-plate dinner.

Guests included Michael Kieschnick, chief executive of Credo, a cell-phone company that uses its profits to advocate for progressive causes.

“This trip out to the West Coast is being framed as a test on Keystone XL,” said Becky Bond, Credo’s political director.

The Obama administration is expected to issue a decision on expanding the Canada-to-Texas Keystone pipeline in coming months.

The project has become a flashpoint in Washington and a dilemma of sorts for President Barack Obama, who will anger the liberal Democratic base if he approves the pipeline or face condemnation from Republicans and pro-business moderates if he nixes job creation by opposing it.

A recent report by the State Department said the pipeline should have no significant effect on the environment along its proposed route, causing supporters to ratchet up pressure on Obama to approve it.

Kept some distance away from the Getty property by police barricades, hundreds of protesters bundled against the cold greeted Obama with chants in opposition to Keystone.

David Turnbull, campaigns director at Oil Change International, helped get the word out about the protest.

“They’re hearing it and we know that they’re listening. The question is whether they’re actually going to act in the way that we think they should,” Turnbull said.

Obama was more specific on economic themes and environmental priorities earlier in the evening at the home of Tom Steyer, a vocal opponent of Keystone XL.

“Part of what we’re going to have to do is to marry a genuine, passionate concern about middle-class families and everybody who is trying to get into the middle class to show them that we’re working just as hard for them as we are for our environmental agenda, and that we can bridge these things in a way that advances the causes of both,” Obama said.