(CNN) - A bid for the 2016 GOP presidential nomination could be in Rick Perry's future, the Texas governor told CNN's Wolf Blitzer Friday.

"Our legislature will be leaving in approximately 55 days," Perry said on "The Situation Room," adding that "at that particular point in time, I'll sit down with friends and family and make a decision about 2016."
END_OF_DOCUMENT_TOKEN_TO_BE_REPLACED

(CNN) - The dean overseeing Johns Hopkins University Medical School said Friday that controversial comments made by faculty member Ben Carson, a neurosurgeon and outspoken conservative, went against the "core values" of the school.

This follows remarks last week by Carson which some saw as equating homosexuality with criminal acts of pedophilia and bestiality. He would later say he apologized "if he offended anyone." The Johns Hopkins Dean said a Monday meeting with students would be held regarding whether to keep Carson as this year's commencement speaker.
END_OF_DOCUMENT_TOKEN_TO_BE_REPLACED

DEVELOPING: OBAMA APOLOGIZES OVER “BEST LOOKING” REMARK California's attorney general received an apology call from President Barack Obama Thursday after he told a crowd of Democratic donors she was "by far the best looking attorney general."
"The president did speak with Attorney General [Kamala] Harris last night after he came back from his trip," White House Press Secretary Jay Carney said in response to CNN’s Brianna Keilar’s question about Obama’s comment. "He called her to apologize for the distraction created by his comments."

JOBS REPORT: REPORT SHOWS 88,000 JOBS CREATED IN MARCH; UNEMPLOYMENT DOWN TO 7.6%
What seemed like good news in Friday's jobs report was a little less than that - the unemployment rate fell, but not because more people found work. Instead, the rate was lower because nearly 500,000 people told a Labor Department survey they were no longer in the labor force, which includes people with a job or looking for one. - Tami Luhby LINK

2016 MOMENT: PERRY’S PRESIDENTIAL DOOR REMAINS OPEN. Texas Gov. Rick Perry has been open about the possibility that he may once again seek the GOP presidential nomination and today on
“The Situation Room with Wolf Blitzer” he spoke about his timeline on the decision making process. “I've got 55 days left of the men and women who are working in this building behind me, the Texas capital. Our legislature will be leaving in approximately 55 days. And hopefully with a great budget put together and continuing to make Texas the epicenter for economic growth in this country. And at that particular point in time, I'll sit down with friends and family and make a decision about 2016.”

MARKET WATCH: U.S. stocks slumped Friday after a sorely disappointing jobs report. The Dow Jones industrial average lost more than 40 points, or 0.3%. The S&P 500 fell 0.4% and the Nasdaq dropped 0.7%. All three indexes were twice as deep in the red earlier in the day.
END_OF_DOCUMENT_TOKEN_TO_BE_REPLACED

Washington (CNN) - A sharp disagreement over the future treatment of undocumented workers on America's farms is holding up progress on the comprehensive immigration reform bill being considered by the Senate's so-called "Gang of Eight."

The two key sticking points are wages and the number of visas to be granted to undocumented farm workers, two sources close to the talks confirmed Friday. 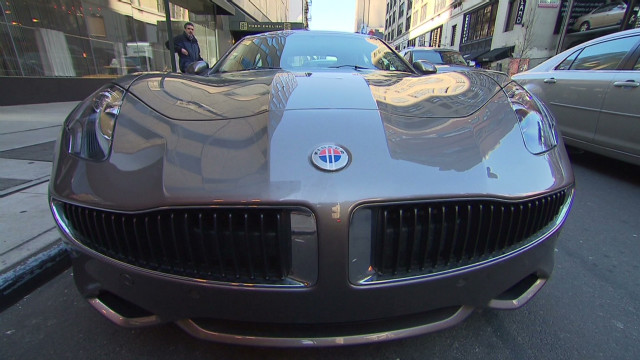 Fisker, recipient of government loans, lays off 75% of workforce

New York (CNNMoney) - Fisker Automotive, maker of the plug-in hybrid Fisker Karma luxury car, has laid off 75% of its workforce, keeping only a small core group of executives, the company said Friday.

Prior to the lay-offs Fisker had had about 200 employees.

Obama apologizes for quip, which some called sexist

(CNN) – California's attorney general received an apology call from President Barack Obama Thursday after he told a crowd of Democratic donors she was "by far the best-looking attorney general."

"The president did speak with Attorney General [Kamala] Harris last night after he came back from his trip," White House Press Secretary Jay Carney told CNN's Brianna Keilar at Friday's briefing. "He called her to apologize for the distraction created by his comments."
END_OF_DOCUMENT_TOKEN_TO_BE_REPLACED

(CNN) – Olympia Snowe, who after serving three terms in the U.S. Senate did not seek re-election last year, said in an interview Friday that as public opinion has shifted on same-sex marriage, so have her views.

"I think obviously this has evolved over time on the whole issue for the whole country and the nations," Snowe, a moderate Republican, told CNN. "We've seen a sea change in society's whole attitude on this particular issue and it's only natural for government to be responsive to those changes."
END_OF_DOCUMENT_TOKEN_TO_BE_REPLACED

"If the president believes these modest entitlement savings are needed to help shore up these programs, there's no reason they should be held hostage for more tax hikes. That's no way to lead and move the country forward," Boehner said in a press release.
END_OF_DOCUMENT_TOKEN_TO_BE_REPLACED

Hillary Clinton ends week with another speech on women's issues

Speaking at the Women in the World summit at New York's Lincoln Center, Clinton called women's rights the "unfinished business of this century," and vowed to use her platform to advance the position of women worldwide.
END_OF_DOCUMENT_TOKEN_TO_BE_REPLACED

(CNN) – The ranks of Senate Democrats who back same-sex marriage grew Friday morning by two as Indiana's Joe Donnelly and North Dakota's Heidi Heitkamp came out publically in support of overturning a federal law banning marriages between same sex couples.

"With the recent Supreme Court arguments and accompanying public discussion of same-sex marriage, I have been thinking about my past positions and votes. In doing so, I have concluded that the right thing to do is to support marriage equality for all," Donnelly, elected last November, wrote in a statement on his Facebook page.
END_OF_DOCUMENT_TOKEN_TO_BE_REPLACED