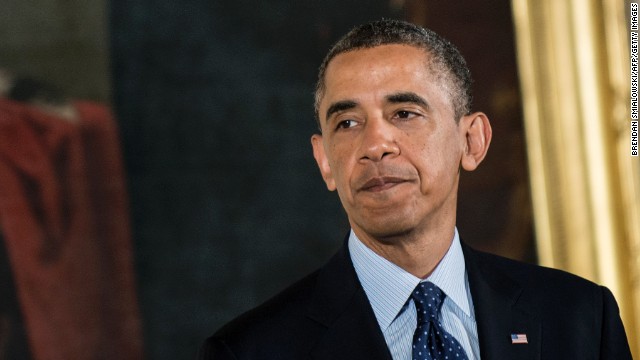 CNN Poll: Obama at 51% approval but lower on key issues

Washington (CNN) - As President Barack Obama begins what could be a pivotal week, with gun control, immigration reform and border security, and the budget all in the spotlight, a new national survey indicates the president's approval rating has inched above the 50% mark.

But according to a CNN/ORC International poll released Monday, the president's approval numbers on those three crucial issues remain below 50%.

Fifty-one percent of people questioned in the survey say they approve of how Obama is handling his duties as president, with 47% saying they disapprove. The president's approval rating is up four points from last month, but below his 55% high this year, recorded in mid-January just before his second inauguration.

"Throughout his first term, President Obama's ratings were typically boosted by positive views of him as a person rather than his policies, and that dynamic seems to be still in force in his second term," says CNN Polling Director Keating Holland. "The change in Obama's approval rating comes among two key elements of his winning electorate coalition - women and younger Americans - suggesting that those old patterns are still in place."

The survey's release comes as the president travels to Connecticut, the state that was the scene of last December's horrific shooting at an elementary school that left 20 young students and six adults dead, as part of his push for Congress to act on legislation to reduce gun violence. According to the poll, 45% of Americans approve of how Obama's handling gun policy, with 52% saying they disapprove. In January, his approval/disapproval on the issue stood at 46%-49%.

On another contentious issue, immigration reform, a couple of members of the Senate's so-called "Gang of Eight" bipartisan members working towards a compromise bill say they may reach agreement as early as later this week. The president is encouraging Congress to pass comprehensive immigration reform this year. Forty-four percent of Americans say they approve of how Obama's handling the issue, with half saying they disapprove.

Wednesday the White House releases its budget for the next fiscal year, which according to senior administration officials will include proposed changes to Social Security and Medicare plus some new tax increases in an effort for the president to reach a deal with Republicans on reducing the nation's massive budget deficit. Even in advance of its release, the budget has drawn criticism from both Republicans and from liberal groups upset over the proposed cuts Social Security and Medicare.

According to the poll, just 38% say they approve of how Obama's handling the federal deficit, with nearly six in ten saying they disapprove, the president's lowest score out of nine issues tested. His only net-positives are foreign affairs and policies toward gays and lesbians.

The survey indicates that male views of Obama have not changed at all since March, but the president's approval rating jumped seven points among women.

"The gain among people under 35 years old was a whopping 15 points, compared to no change at all in the middle age brackets and a seven-point drop among senior citizens, possibly fueled by concerns over Obama's proposed changes to Social Security," adds Holland. "Obama has also gained among moderates, while his high support among liberals and his low support among conservatives has remained unchanged.

So where does the president stand compared to his two-term predecessors.

Historically, Obama's 51% approval rating is par for the course among second-term presidents. Four months after their second inaugurals, George W. Bush, Ronald Reagan, and Richard Nixon all had approval ratings within a couple of points of Obama's current mark. Only Bill Clinton, with a 54% approval rating in April, 1997, had better numbers than Obama does today.

The CNN poll was conducted by ORC International, from April 5-7, with 1,012 adults nationwide questioned by telephone. The survey's overall sampling error is plus or minus three percentage points.