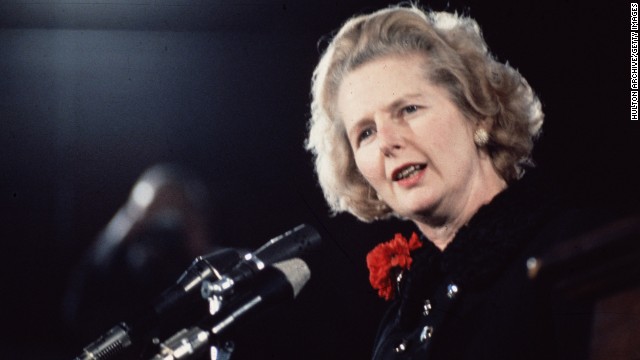 (CNN) - With news that former British Prime Minister Margaret Thatcher had passed away, the U.S. political world, especially conservatives, lit up Monday with condolences of the woman who became known as the "Iron Lady."

"I think she was a great leader, someone who had a vision, a purpose and went after that purpose and brought everyone along with her for a while," former Secretary of State Colin Powell said on CBS' "This Morning." "But the British people have lost great inspiration. They have lost somebody who should be an example to anybody in political life today."

"She exuded influence and power," he continued. "The hair style, the dress, her manner, the way in which she carried that handbag. When she walked into a room, you knew somebody had arrived and you'd better be careful. At the same time she had an extremely warm side to her."

President Barack Obama said "the world has lost one of the great champions of freedom and liberty, and America has lost a true friend."

"She stands as an example to our daughters that there is no glass ceiling that can't be shattered," he continued. "As prime minister, she helped restore the confidence and pride that has always been the hallmark of Britain at its best. And as an unapologetic supporter of our transatlantic alliance, she knew that with strength and resolve we could win the Cold War and extend freedom's promise."

"Ronnie and Margaret were political soul mates, committed to freedom and resolved to end Communism," she said. "As Prime Minister, Margaret had the clear vision and strong determination to stand up for her beliefs at a time when so many were afraid to "rock the boat." As a result, she helped to bring about the collapse of the Soviet Union and the liberation of millions of people."

Former President George W. Bush said in a statement that he and his wife, Laura, were saddened by Thatcher's death.

“She was an inspirational leader who stood on principle and guided her nation with confidence and clarity," he continued. "Prime Minister Thatcher is a great example of strength and character, and a great ally who strengthened the special relationship between the United Kingdom and the United States. Laura and I join the people of Great Britain in remembering the life and leadership of this strong woman and friend.”

House Speaker John Boehner labeled her "the greatest peacetime prime minister" and said Americans "will always keep Lady Thatcher in our hearts for her loyalty to Ronald Reagan and their friendship that we all admired."

"Margaret Thatcher, a grocer's daughter, stared down elites, union bosses, and communists to win three consecutive elections, establish conservative principles in Western Europe, and bring down the Iron Curtain," the speaker said in a statement. "There was no secret to her values – hard work and personal responsibility – and no nonsense in her leadership."

Former President Bill Clinton hailed Thatcher for understanding "that the special relationship which has long united our two nations is an indispensable foundation for peace and prosperity."

"Our strong partnership today is part of her legacy," he said. "Like so many others, I respected the conviction and self-determination she displayed throughout her remarkable life as she broke barriers, defied expectations, and led her country. Hillary, Chelsea, and I extend our condolences to her family and to the people of the United Kingdom."

In another statement, former Sens. Bob and Elizabeth Dole said Thatcher "ranks among the finest of British prime ministers and the greatest political figures of the twentieth century."

Former President George H. W. Bush said in a statement: "The personal grief we Bushes feel is compounded by the knowledge that America has lost one of the staunchest allies we have ever known; and yet we have confidence that her sterling record of accomplishment will inspire future generations."

Former Secretary of State Condoleezza Rice said she was "honored to know her and to be inspired by her."

"There was no more potent force in the defense of freedom than this remarkable woman," she said in a statement. "Her unshakable belief in the universal appeal of liberty helped to steer the free world through treacherous times until communism was defeated and Europe emerged whole, free and a peace."

We are saddened by the passing of Margaret Thatcher, the 'Iron Lady' of conservative leaders. Our thoughts and prayers are with her family.

Our prayers are with Lady Thatcher's family. She was one of the world's greatest conservative leaders and will always be remembered

You inspired the world to empower people and families over government. In doing so, you helped save it. Rest in peace, Lady Thatcher.

RIP Margaret Thatcher, one of the great leaders of the 20th century

The Iron Lady showed us how integrity, strength and freedom can change the world. Her spirit will continue on. RIP Margaret Thatcher.

My thoughts and prayers with Margaret Thatcher and family. A courageous leader and staunch defender of freedom, she will be greatly missed.