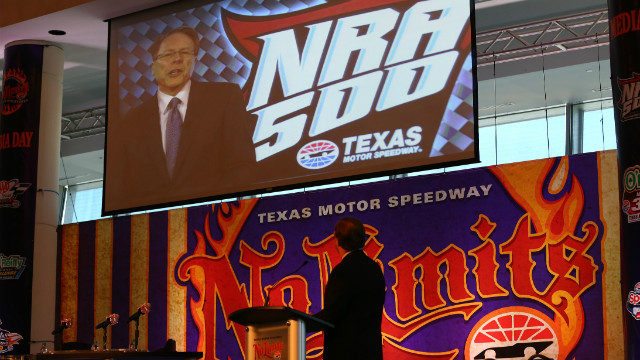 "The race not only brings national attention to an organization that has been the face of one side of this heated debate, it also features the live shooting of guns at the end of the race," Murphy wrote to Rupert Murdoch, the chairman and chief executive of News Corporation, which owns the Fox network where the race will be broadcast.
END_OF_DOCUMENT_TOKEN_TO_BE_REPLACED

Perkins, president of the Family Research Council, made the request in an email to supporters of his organization, as members of the Republican National Committee met in California to discuss campaign strategy and political messaging.
END_OF_DOCUMENT_TOKEN_TO_BE_REPLACED

Sen. Manchin to Sandy Hook parents: 'I can do something'

(CNN) - Sen. Joe Manchin of West Virginia was noticeably moved by the Sandy Hook families he met Wednesday afternoon. He met with them just hours after unveiling a bipartisan bill alongside Republican Sen. Pat Toomey of Pennsylvania that would extend background checks to guns bought online and at gun shows.

"I can do something," an emotional Manchin told the parents who lost children in the Sandy Hook attack.

"I would strongly ask him to, first of all, refrain from taking any such provocative measures, which is clearly in violation against the Security Council resolution and against the expectation of the international community," Ban said during an exclusive appearance on CNN's "The Situation Room with Wolf Blitzer."
END_OF_DOCUMENT_TOKEN_TO_BE_REPLACED

BELLIGERENT: Obama says North Korea needs 'to try lower temperatures’… After a meeting with United Nations Secretary General Ban Ki-moon, President Barack Obama said the two agreed that “now is time for North Korea to end the kind of belligerent approach that they've been taking and to try lower temperatures.” “Nobody wants to see a conflict on Korean peninsula,” Obama told reporters. “It’s important for North Korea to observe basic rules and norms that are set forth including a wide variety of UN resolutions that have passed.”

GUNS TO GET A VOTE: Senate overcomes filibuster, clearing the way for debate on gun bill… The U.S. Senate voted Thursday to overcome a Republican-led filibuster against tougher gun laws, clearing the way for a major congressional debate on a package of proposals sought by President Barack Obama in the aftermath of the Connecticut school massacre. Because of the bipartisan deal between Sens. Joe Manchin, D-West Virginia, and Pat Toomey, R-Pennsylvania, Senate Democrats proposing the legislation received support from enough Republicans to pass the cloture motion, 68-31, that sets up debate expected to last for two weeks. – Tom Cohen

END_OF_DOCUMENT_TOKEN_TO_BE_REPLACED

(CNN) – The head of the House Republican campaign arm, Rep. Greg Walden, is getting pushback from both his own party and the White House for bucking the party line and saying the president was wrong to include entitlement changes in his budget proposal.

"I've made it clear that I disagree with what Chairman Walden said," Boehner said in his weekly press conference on Thursday, referring to the chairman of the National Republican Congressional Committee.
END_OF_DOCUMENT_TOKEN_TO_BE_REPLACED

Jacob Conway, an executive committee member of the Louisville-Jefferson County Democratic Party, told CNN that members of Progress Kentucky admitted to him in February they made the recording. That's the same group behind offensive tweets posted last month targeting McConnell's wife.
END_OF_DOCUMENT_TOKEN_TO_BE_REPLACED

Los Angeles (CNN) - Louisiana Gov. Bobby Jindal will headline a GOP fundraiser next month in New Hampshire, a move that will fuel speculation he is seriously eyeing a bid for the Republican presidential nomination.

Jindal will raise money for the campaign arm of state Senate Republicans at an event in Manchester with ticket prices running from $100 to $5,000, CNN has learned.
END_OF_DOCUMENT_TOKEN_TO_BE_REPLACED

(CNN) – It seemed like White House Press Secretary Jay Carney was waiting for the question when he was asked Thursday about Jay-Z's newest rap, which focuses on his U.S. government-approved trip to Cuba with wife Beyonce last week.

In the rap, Jay-Z suggested their clearance came from the White House, when it actually came from the Treasury Department.
END_OF_DOCUMENT_TOKEN_TO_BE_REPLACED

Was it 'three times' or 'free time' on McConnell tape?

(CNN) - One of the questions to emerge from that secret recording of a Mitch McConnell campaign strategy session is whether it proves the Senate Minority Leader is caught on tape misusing his congressional staff.

The DC-based watchdog group, Citizens for Responsibility and Ethics and Washington has asked the FBI to investigate.
END_OF_DOCUMENT_TOKEN_TO_BE_REPLACED