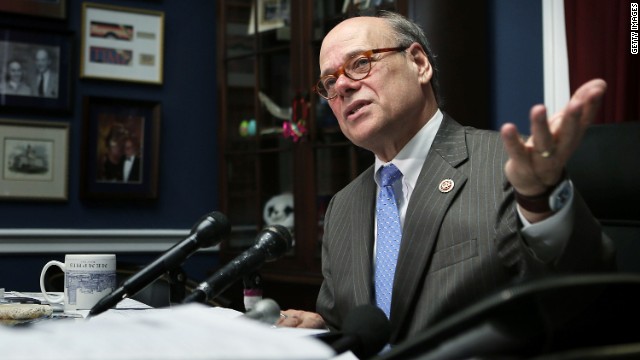 Cohen told reporters Friday he was retaliating against what he called "gotcha journalism" and that they should have been more careful two months ago treating a story about his daughter.

"A deleted tweet is not something that is necessarily harmful," he said, noting certain media outlets suggested a message he had sent to a young woman was "salacious."

In fact, Cohen's relationship is one of father-daughter, not previously disclosed.

Cohen earlier this week tweeted, then deleted 21 minutes later a post about singer Cyndi Lauper that said "great night, couldn't believe how hot u were. See you again next Tuesday. Try a little tenderness."

He posted a similar tweet prior to that, but deleted it after 34 seconds.

Once deleted, "I knew the press would also see the worst in it, and publish it," Cohen explained, "and by doing so they would publicize the Memphis music event."

Cohen, who represents Memphis, was referring to an entertainment show Tuesday at the White House called "Memphis Soul" that included performances by Lauper and Justin Timberlake. A recording of the event will be broadcast on public television next week.

"If I put out a press release or a tweet, nobody would see it," Cohen said.

Reporters who gathered Friday at Cohen's office on Capitol Hill questioned whether the strategy was ethical and worth risking his credibility.

"I was honest, she was hot," he replied, "it was a hot performance."

He said the stunt has been successful in that most of the stories about his message to Lauper have mentioned the music show that benefits his constituents.

He acknowledged he has not heard from Lauper in response to the message. "Not yet, and she is married, I didn't realize that, I kind of Googled her afterwards."

Cohen was asked if his staff was aware he was plotting the hoax. The congressman paused, then said: "I'm a one-trick pony."

When challenged that his story may not be believable to some, Cohen pointed to conversations he said he had Monday with other congressmen, in which he told them, "Boys, wait 'til you see what I do this week with the press."

He urged the press to contact Rep. Joe Courtney, D-Connecticut, and Rep. John Yarmuth, D-Kentucky to verify the story.

Stephen George, a spokesman for Yarmuth, however, said he was unaware of the content of the conversation but that the two did not speak until after Cohen sent and deleted the tweet.

And Josh Zembik, communications director for Courtney, said the congressman did not find out about Cohen's tweet until Wednesday night while he was at Nationals baseball game, at which point the tweet had already been sent and deleted.

Along with the media, Cohen in particular took aim at the Sunlight Foundation, a nonprofit watchdog group that manages the website Politiwoops, a tracker that archives deleted tweets by politicians. Politiwoops caught his tweet back in February, as well as the tweet this week. Cohen argued the website creates a toxic environment for media and politics.

Responding to his comments, Nicko Margolies at the organization wrote on their blog that "this is hardly the first time deleted tweets surfaced by Politwoops were deleted specifically to appear in Politwoops."

He referenced other instances where members of Congress purposely wrote tweets, then deleted them, with messages to the website, as a way to test the system.

"As members of Congress learn about the existence of Politwoops, we've seen tweets simply reading 'test' which may imply they are checking if the site tracks their particular accounts," he wrote. "Politwoops is a project to document messaging changes from politicians and it's fascinating to see how the site's role has developed."