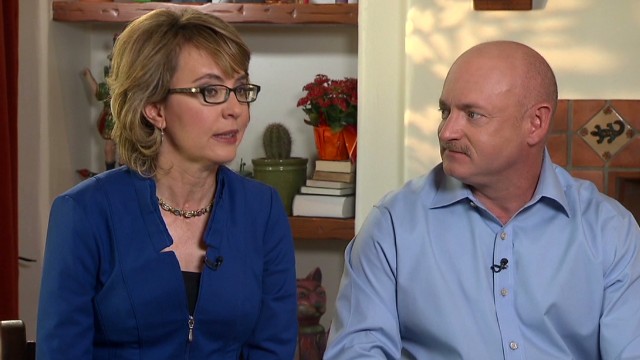 Washington (CNN) - The gun control group founded by former congresswoman Gabrielle Giffords, critically wounded in a January 2011 shooting, and her husband Mark Kelly is trying to rally support for the two senators who this week unveiled a bi-partisan bill to dramatically expand background checks for gun buyers.

The group, Americans for Responsible Solutions, is sponsoring robocalls into Pennsylvania, the home states of Republican Sen. Pat Toomey and West Virginia, the home state of Democrat Sen. Joe Manchin which asks the public to help get the bill passed. Kelly recorded the soundtrack for the calls.

"I am calling to thank your Senator Pat Toomey for working across party lines to sponsor critical legislation to keeps out of the hands of criminals and the mentally ill by expanding background checks. If Senator Toomey's bill becomes law, it will be more difficult for dangerous people to get guns and our communities will be safer as a result all while protecting our Second Amendment rights. But he needs your support to get it done." Kelly says in one call.

Audio from Americans for Responsible Solutions

In the other he says "I am calling to thank your Senator Joe Manchin for working across party lines to sponsor critical legislation to protect the Second Amendment rights of West Virginians and to keep your family safe from gun violence. If Senator Manchin's bill becomes law more West Virginians will have the opportunity to responsibly exercise their gun rights and fewer dangerous people will have access to guns."

In both calls Kelly asks the public to call the senators to show their support for the new legislation. "He needs your help to get it done," says Kelly.

The proposed bill would mandate background checks for guns purchased at shows and online but would exempt transfers of firearms by family members and some private sales. In an email to supporters Friday, Giffords and Kelly lauded the Senate vote on Thursday defeating an attempt to filibuster the major gun bill. The Manchin-Toomey proposal will be voted on as an amendment to that legislation.

"We're going to be on Capitol Hill next week to talk to Senators about our support for the Manchin-Toomney bill to expand background checks. It would be great if they heard from you before we got there," they said.

CNN Chief Congressional Correspondent Dana Bash reported earlier this week Giffords was going to visit Washington next week, along with Kelly, to attend an unveiling of a bust of Gabe Zimmerman, an aide to Gifford who was killed along with five others in the 2011 Tucson, Arizona shooting that wounded the then-congresswoman from Arizona.

Speaker John Boehner and Minority Leader Nancy Pelosi are both scheduled to attend the eevent scheduled for Tuesday, April 16. Members of Gabe Zimmerman's family as well as other dignitaries are expected to be in attendance.