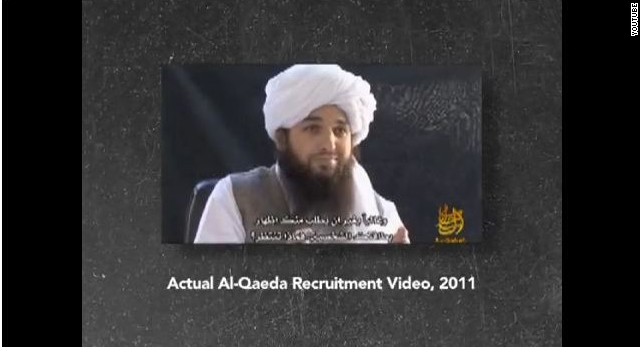 Americans United for Change, the group behind the ad, will initially spend $5,000 to air the spot in Lexington, according to spokesman Jeremy Funk.

"Most Kentucky residents want background checks for gun sales, but Republican leader Mitch McConnell is against them. So who does agree with Mitch?" a narrator asks in the ad.

A clip from the al Qaeda video shows California-native Adam Yahiye Gadahn saying “You can go down to a gun show at the local convention center and come away with a fully automatic assault rifle, without a background check, and most likely without having to show an identification card. So what are you waiting for?"

That particular section of the video is erroneous - it is illegal to purchase a fully automatic weapon in the U.S by anyone but a strictly licensed and regulated federal firearms dealer with special permission.

However, other types of guns can be sold at gun shows or through private sales without a background check, a fact some lawmakers want to change. The U.S. Senate voted on Thursday to overcome a filibuster led by some Republicans, including McConnell, against tougher gun laws, clearing the way for a major congressional debate on a package of proposals sought by President Barack Obama in the aftermath of the Connecticut school massacre.

“Do Sen. McConnell and fellow Republicans who oppose broader background checks realize how totally out of step they are with the American people considering the only people who agree with them are big gun manufacturers, criminals, and terrorists? Talk about bad company," wrote Tom McMahon, executive director of Americans United for Change, in a statement.

"A lot of Kentuckians support the Second Amendment; that doesn’t make them al Qaeda. It’s outrageous the left would make the comparison, but not surprising considering their track record of bullying anyone who disagrees with their point of view," he said in an email.

The group is registered with the IRS as a 501(c)(4), which means it isn't legally required to disclose its donors.