"We still do not know who did this or why," he said from the Brady Press Briefing Room, cautioning people against jumping to conclusions. "But make no mistake, we will get to the bottom of this, and we will find out who did this, we'll find out why they did this."

"The American people will say a prayer for Boston tonight," he said.

Notably absent from his remarks was the word "terror," though federal investigators are classifying the bombings as a terror event. It is not clear if it's from a domestic or foreign source, a federal law enforcement official with knowledge of the investigation said.

"Today is a holiday in Massachusetts, Patriot's Day. It's a day that celebrates the free and fiercely independent spirit that this great American city of Boston has reflected from the earliest days of our nation, and it's a day that draws the world to Boston's streets in a spirit of friendly competition," he said. "Boston is a tough and resilient town, so are its people. I'm supremely confident that Bostonians will pull together, take care of each other, and move forward as one proud city and as they do, the American people will be with them every single step of the way." 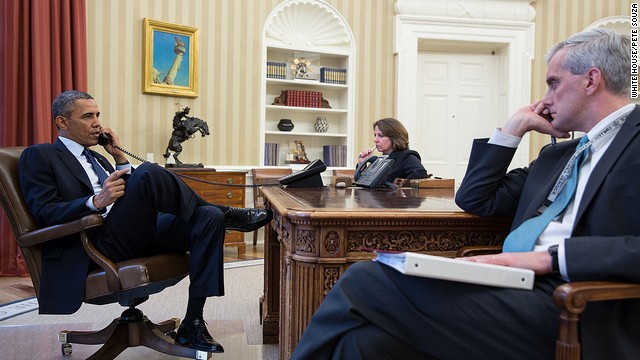 President Barack Obama talks on the phone with FBI Director Robert Mueller to receive an update on the explosions that occurred in Boston, in the Oval Office, April 15, 2013. Seated with the President are Lisa Monaco, Assistant to the President for Homeland Security and Counterterrorism, and Chief of Staff Denis McDonough. (Official White House Photo by Pete Souza)

After Obama's statement, a White House official said "any event with multiple explosive devices – as this appears to be – is clearly an act of terror, and will be approached as an act of terror."

"However, we don’t yet know who carried out this attack, and a thorough investigation will have to determine whether it was planned and carried out by a terrorist group, foreign or domestic," the official continued.

According to the president's Facebook page, an organized call-in event scheduled for Tuesday has been postponed.

"Due to the events at the Boston Marathon, we are postponing tomorrow's National Call Day on gun violence prevention. Our thoughts and prayers are with everyone in Boston," his Facebook stated.

The event, run by the advocacy group Organizing for Action, would have organized supporters to call their senators and urge them to support the current gun legislation bill.

Over on Capitol Hill, House Speaker John Boehner led a moment of silence on the House floor for victims in Boston. 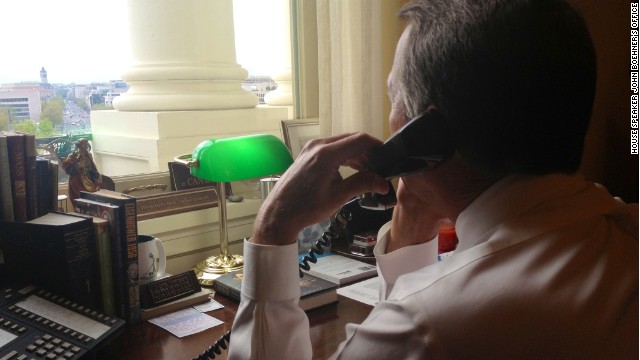 And a press conference to roll out the so-called Gang of Eight's immigration plan has also been postponed, according to Democratic Sen. Chuck Schumer of New York.

Thoughts & prayers are with everyone in Boston. Our bipartisan work on immigration will wait at least a day out of respect for the victims.

Vice President Joe Biden, meanwhile, was on a conference call earlier in the day about the Senate legislation to combat gun violence when he heard about the explosions.