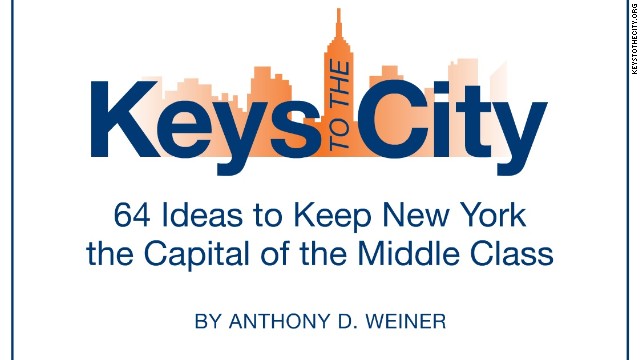 (CNN) – Former Rep. Anthony Weiner, who in a repentant interview last week said he was considering a run for New York mayor, released a document Sunday detailing a plan to restore the city as a place for middle class families.

Paid for by "Weiner for Mayor," established for a 2009 bid, the document closely mimics a plan released during that campaign five years ago.

"To maintain New York's place as the capital of the middle class – and to keep the promise of prosperity for generations to come – we must meet today's challenges with fresh ideas. Bold ideas. Substantive and practical ideas," the document reads.

It contains some biographical details, including a few paragraphs about growing up in Brooklyn, but doesn't mention the sexting scandal that cost Weiner his post in the U.S. House of Representatives. He does, however, note that his concern for middle class New Yorkers was bolstered by the birth of his own son in 2011.

"I believe Jordan deserves to grow up with the same, if not better, opportunities than I had," Weiner writes. "But in just one generation, the promise of our city has faded. "

According to the New York Times, the document is a replica of a 2008 document Weiner prepared during the run-up to 2009's mayoral election. Weiner, initially considering a bid, declined to run when the city council extended the mayor's term limits, allowing incumbent Michael Bloomberg to run again.

"Many sentences and, in some cases, complete paragraphs, are repeated verbatim from the earlier document, and the updated booklet does not address many high-profile issues in this year's mayoral contest, including the police tactic of stop, question and frisk," the New York Times reported.

The 2008 document is no longer available online, though a screengrab of the cover in the Times demonstrates the "Rep." has been dropped from in front of Weiner's name in the current edition.

He goes on to detail challenges facing working class New Yorkers, who live in a city where the gap between rich and poor is growing.

"For every private equity firm that made a fortune, there's a neighborhood pharmacist who has been put out of business by a big chain," he writes. "For every developer who has seen an investment turn into a real estate bonanza, there's a family in a neighborhood like Sunnyside trying desperately to keep up with a rising property tax bill."

The document is divided into a series of issues – education, hunger, transportation, small business - with specific policy prescriptions for each area.

"I remain optimistic about the future of the city that gave me my every opportunity, because the smarts, grit, and determination that built the Big Apple into the world's greatest metropolis endure as our greatest asset," he writes.

Weiner, who resigned for the House in 2011 amid scandal over a lewd photo sent via Twitter, confirmed in an interview published last Wednesday that he's considering a political comeback, with this year's New York City mayoral race on his radar.

The Democrat admitted he's eying the mayor's race in a lengthy New York Times Magazine article that detailed his life with wife Huma Abedin, a close aide to former Secretary of State Hillary Clinton, and their attempts to stay out of the limelight over the past two years-until now.

"We have been in a defensive crouch for so long," Weiner said. "We are ready to clear the decks on this thing."

"I don't have this burning, overriding desire to go out and run for office," Weiner added later. "It's not the single animating force in my life as it was for quite some time. But I do recognize, to some degree, it's now or maybe never for me, in terms of running for something."

Should he decide to enter the mayoral race, he'll have some tough competition. Speaker of the City Council Christine Quinn has long been the Democratic front-runner, and has a big lead over Republican candidates in hypothetical match-ups. If Quinn is elected, she'll become New York's first female and first openly gay mayor.

One top New York Democrat was keeping mum on the potential Democratic showdown on Sunday.

Asked whether Weiner deserved a second chance in politics, the usually vocal Sen. Chuck Schumer had nothing to say.

"I'm not going to comment on that," Schumer said on ABC's "This Week."

He gave the same response as the question was asked twice more.