"Any time bombs are used to target civilians, it is an act of terrorism," Obama said, adding that it remained unclear who carried out the attack and why. It was the first time the president used the word "terror" to refer to the deadly bombs.

Later in the day, Vice President Joe Biden vowed to "get to the bottom" of Monday's terror attack, which left three dead and scores wounded.

"We don't have any hard information yet," Biden said on his way to an event on Capitol Hill. "But I can assure we will find out who did it and bring them to justice."

Asked whether there was a sense among investigators of whether the attack originated from a foreign or domestic perpetrator, Biden said, "Not yet."

Obama, making his second formal statement following Monday's blasts, said said investigators do not yet know "who carried out this attack or why, whether it was planned and executed by a terrorist organization foreign or domestic or was the act of a malevolent individual." 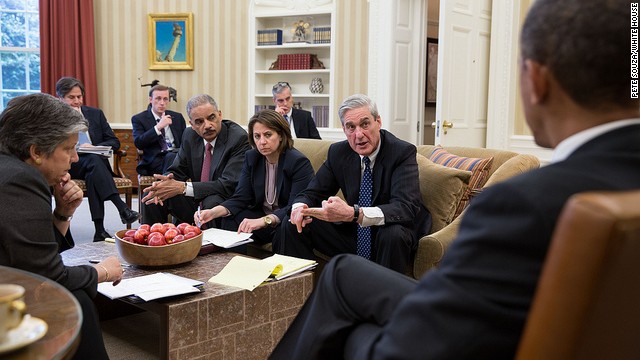 On Monday, as details of the attack were emerging, Obama delivered a brief statement that avoided the use of the word "terror." He said then he had ordered the "full resources" of the federal government to respond to the bombing.

"Make no mistake, we will get to the bottom of this, and we will find out who did this, we'll find out why they did this," he said.

Officials in Washington, who entered the week prepared for battle over immigration and gun control, shifted focus Tuesday to the aftermath of the deadly terror bombing.

Obama ordered the flag above the White House lowered to half-staff, while inside he was huddling with top advisers, receiving the latest details on the investigation into the attack. CNN spotted Vice President Joe Biden, FBI Director Robert Mueller, Attorney General Eric Holder and Homeland Security Secretary Janet Napolitano headed into the White House Tuesday morning.

Other events on his schedule – including a meeting with Sens. John McCain and Chuck Schumer on immigration reform – were still slated to go forward. In the afternoon, Obama will honor last year's NASCAR sprint cut champion Brad Keselowski during a ceremony on the South Lawn.

Cabinet members, along with national security and counterterrorism staff, will convene Tuesday evening to brief the president at the White House, though an official said this wasn't a full Cabinet meeting.

Other events in Washington were pushed aside after Monday's bombing. A planned press conference unveiling of the Senate's immigration bill was postponed, though the legislation was still expected to be filed Tuesday.

Another top piece of legislation – gun control – had already been delayed in the Senate as supporters worked to win over more votes. And two congressmen, Reps. Pete King, R-New York, and Mike Thomas, D-California, introduced a background checks bill identical to the Senate measure that was unveiled last week.

But a call-in event on guns sponsored by Organizing for Action, a political group formed from Obama's presidential campaign, was scrapped.