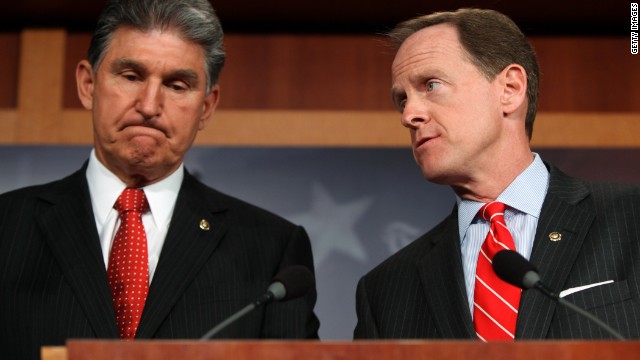 WASHINGTON, DC - APRIL 10: Sen. Pat Toomey (R-PA) (R) and Sen. Joe Manchin (D-WV) speak to the press about background checks for gun purchases, in the U.S. Capitol building April 10, 2013 in Washington DC. The pair is proposing a bipartisan compromise, a proposal to be voted on as an amendment that would expand background checks to firearms sales at gun shows and on the Internet. (Photo by Allison Shelley/Getty Images)
April 17th, 2013
05:22 PM ET

(CNN) - Proponents of the failed Senate amendment that called for expanding the background check system reacted with sharp disappointment Wednesday after the Senate defeated the measure in a 54-46 vote.

Meanwhile, those who opposed the amendment expressed satisfaction and pride, claiming victory for voting down a provision they claimed would infringe on Second Amendment rights.

Check out a range of the reactions after the jump.

Mark Kelly and Gabby Giffords: "Today, the US Senate ignored the will of the American people and failed to pass a bi-partisan commonsense, moderate solution for keeping deadly weapons out of the hands of dangerous people and making our communities safer. Almost 90% of Americans said they wanted this sensible solution to be implemented, but the senators voting against the measure chose instead to obey the leaders of the powerful corporate gun lobby, instead of their constituents. We know this proposal respected the rights of lawful gun owners like ourselves, and we know it would have saved lives.

We will use every means possible to make sure the constituents of these senators know that their elected representatives ignored them, and put Washington, DC special interest politics over the effort to keep their own communities safer from the tragedy of gun violence."

New York City Mayor Michael Bloomberg, co-chair of Mayors Against Illegal Guns: "Today's vote is a damning indictment of the stranglehold that special interests have on Washington. More than 40 U.S. senators would rather turn their backs on the 90 percent of Americans who support comprehensive background checks than buck the increasingly extremist wing of the gun lobby. Democrats – who are so quick to blame Republicans for our broken gun laws – could not stand united. And Republicans – who are so quick to blame Democrats for not being tough enough on crime – handed criminals a huge victory, by preserving their ability to buy guns illegally at gun shows and online and keeping the illegal trafficking market well-fed.

My only regret is that our amendment did not pass. It’s not the outcome I hoped for, but the Senate has spoken and it’s time to move on.

No Senator who heeled today on the NRA's command should have the gall to issue mournful statements the next time gun violence strikes.

Stephanie Taylor, Progressive Change Campaign Committee co-founder: "Today, the Senate voted against the 91% of Americans who support background checks to stop gun violence. We'll be holding accountable Democrats who voted against their constituents by running ads in their states, featuring some of the 23,000 gun owners who have joined our campaign for common sense gun reform."

Neil Sroka, Communications Director, Democracy for America: "Democrats who were too cowardly to get on the right side of a 90-10 issue like universal background checks better believe that the progressives will remember their spinlessness on gun violence prevention come reelection time. The over 1 million members of Democracy for America nationwide work to elect progressive fighters, not U.S. Senators who can be cowed by the right-wing fringe and gun industry lobbyists like the NRA." -

Disappointed in the #GOP for preventing a vote on reforms that could save lives. Americans deserve better.

Gov. Dan Malloy, D-Connecticut: "There is much more that needs to be done on the issue of gun violence prevention. But when the Senate cannot come together on an issue that is supported by the vast majority of Americans, there is little to no hope that common sense will prevail. The members who voted against this proposal should be ashamed of themselves.”

Erica Lafferty, daughter of slain Sandy Hook principal Dawn Lafferty Hochsprung: "The next time there's a mass shooting and they're asked what they did to prevent it, they're going to have to say nothing."

National Rifle Association Institute for Legislative Action: Today, the misguided Manchin-Toomey-Schumer proposal failed in the U.S. Senate. This amendment would have criminalized certain private transfers of firearms between honest citizens, requiring lifelong friends, neighbors and some family members to get federal government permission to exercise a fundamental right or face prosecution. As we have noted previously, expanding background checks, at gun shows or elsewhere, will not reduce violent crime or keep our kids safe in their schools.

The NRA will continue to work with Republicans and Democrats who are committed to protecting our children in schools, prosecuting violent criminals to the fullest extent of the law, and fixing our broken mental health system. We are grateful for the hard work and leadership of those Senators who chose to pursue meaningful solutions to our nation's most pressing problems.

I voted NO on Toomey/Manchin background check proposal. The Amendment failed to receive 60 votes. #Protect2A

Heritage Action for America CEO Michael A. Needham: "Today, the American people dealt a devastating blow to the left's attempt to undermine the Second Amendment. The Schumer-Toomey-Manchin Amendment was an ineffective Washington solution crafted behind closed doors that has no place in our political system. Heritage Action will continue to oppose any bill that infringes on the constitutional rights of the American people."