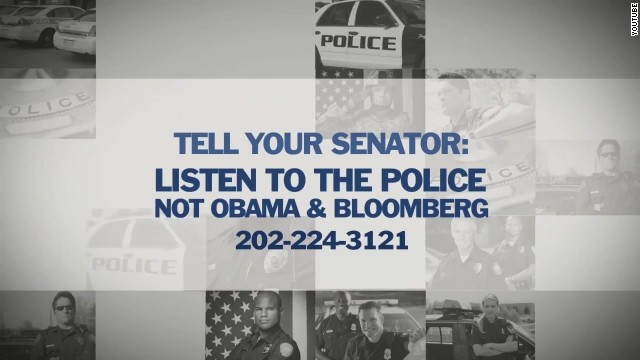 The 30-second spot, which the NRA says it will spend $500,000 to place on websites like the Drudge Report, the Washington Post, and Hulu, uses polls of police officers showing little support for increasing background checks and banning assault weapons.

"President Obama and Mayor Bloomberg are pushing gun control. But America's police say they're wrong," a narrator says in the ad. "Seventy-one percent of the police say Obama's gun ban will have zero effect on violent crime. Eighty percent of police say more background checks will have no effect. Ninety-one percent say the right answer is swift prosecution and mandatory sentencing. Tell your senator to listen to America's police instead of listening to Obama and Bloomberg."

The poll cited in the spot comes from PoliceOne, an online news site for police officers. The site states "More than 15,000 officers completed the survey, which was promoted by PoliceOne exclusively to its 400,000 registered members, comprised of verified law enforcement professionals."

A coalition of law enforcement groups responded negatively to the ad Wednesday, saying it mischaracterized the views of their profession.

"Only law enforcement speaks for law enforcement," wrote Baltimore County Police Chief Jim Johnson, who chairs the National Law Enforcement Partnership to Prevent Gun Violence. "We hope that members of Congress will listen directly to law enforcement and not those who purport to represent us but do not."

Earlier this year, an NRA ad drew sharp criticism for referencing the president's children. Attacking Obama as an "elitist hypocrite," the commercial asked why he opposes the idea of placing armed guards in every school-a proposal pushed by the NRA-yet his own children attend a school with similar security.

Pro-gun control groups have also been airing their stance on in television ads. The organization backed by New York City Mayor Michael Bloomberg went up with a spot last week in seven states and Washington, D.C., urging viewers to call lawmakers to convince them to vote for a measure expanding background checks on gun sales.

That effort – which was the product of a bipartisan deal in the Senate last week – goes up for a vote Wednesday, along with a number of other gun control amendments.

"Some Democrats and Republicans are coming together to support comprehensive background checks on gun sales. That will protect the Second Amendment and help keep guns out of the hands of dangerous criminals," the ad says.

The senators targeted in the spots from Bloomberg's group were Republicans Saxby Chambliss and Johnny Isakson of Georgia; Dan Coats of Indiana; Dean Heller of Nevada; Kelly Ayotte of New Hampshire; and Lamar Alexander and Bob Corker of Tennessee.

Meanwhile, two Democratic-aligned organizations - the Democratic National Committee and Organizing for Action, the group formed from Obama's presidential campaign - were sending emails to supporters urging them to call lawmakers asking for a "yes" vote on the background checks measure.