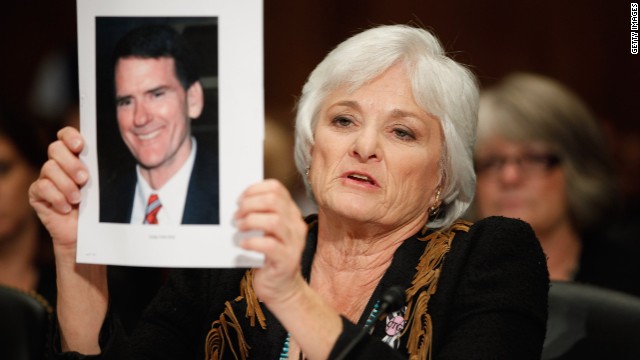 WASHINGTON, DC - NOVEMBER 15: Patricia Maisch, one of the people who helped halt the Tucson shooting involving Rep. Gabrielle Giffords (D-AZ), holds up a photograph of victim Federal Judge John Roll while testifying before the Senate Judiciary Committee's Crime and Terrorism Subcommittee on Capitol Hill November 15, 2011 in Washington, DC. Maisch, 61, helped to disarm gunman Jared Loughner by grabbing a fully loaded magazine away from him, helping disarm Laughner before he could inflict more damage. Maisch testified in support of the Fix Gun Checks Act, which would strengthen federal power over the states handling of individual background checks. (Photo by Chip Somodevilla/Getty Images)
April 17th, 2013
06:48 PM ET

Washington (CNN) - Two women whose lives were touched by recent mass shootings shouted in the Senate chamber "shame on you" just after lawmakers defeated a bipartisan proposal to expand background checks on gun sales.

After the outburst on Wednesday, Vice President Joe Biden, who was presiding in the Senate, called for order. The women were later expelled from the Capitol although it did not appear they were arrested.

Patricia Maisch, of Tucson, Arizona, who took the gun magazine from the hands of the man who shot former Rep. Gabby Giffords and several other people, explained to reporters why she yelled at the senators.

"Because they are an embarrassment to this country that they don't' have any compassion or care for people who have been taken brutally from their families," she said.

Lori Haas of Richmond, Virginia, whose daughter, Emily, was shot but survived the Virginia Tech massacre also was angry.

"We are sick and tired of the death in this country and these legislators stand up there and think it's a bunch of numbers. There's been 187,000 Americans killed since Virginia Tech. My daughter was shot and injured six years ago yesterday. It's a shame, it's appalling, it's disgusting," she said.