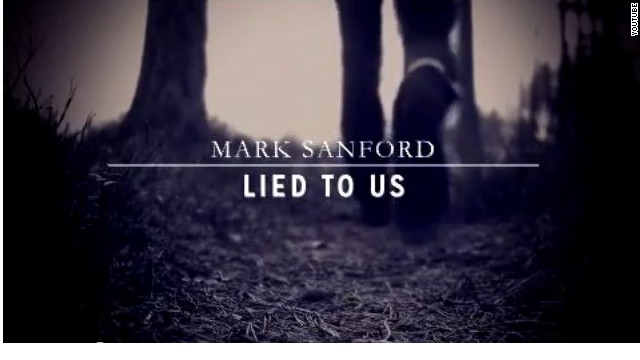 National Democrats to get aggressive in South Carolina race

(CNN) – One day after a national Republican campaign group pulled out of the South Carolina special congressional race, the group's Democratic counterpart announced it's stepping in.

The Democratic Congressional Campaign Committee says it will begin running an attack ad Friday against Republican candidate Mark Sanford, the former governor of the state who's attempting a political comeback after his career was derailed following his now-famous extramarital affair with a woman in Argentina.

Sanford became the Republican nominee in the race earlier this month. He's seeking to represent the 1st Congressional District, which he represented before becoming governor.

According to a Democratic official, the DCCC is spending $205,000 on the ad and will run it on broadcast and cable in the Charleston and Savannah markets.

The new spot marks the second time this week a major Democratic group announced it was going up with an ad against Sanford. House Majority PAC, a political action committee that backs Democratic House candidates, said Wednesday it would begin a three-week, six-figure media campaign.

Earlier this week, court documents showed that Sanford's ex-wife formally accused Sanford of trespassing in February. Sanford now has a court appearance scheduled two days after the May 7 election. While the former governor claimed he was simply watching the Super Bowl with his son, his ex-wife, Jenny Sanford, argued he has appeared on her property more than once, despite legal orders barring him from doing so.

Amid the reports, the National Republican Congressional Committee announced Wednesday it would no longer be involved in the race, dealing a major blow to Sanford's campaign.

"Mark Sanford has proven he knows what it takes to win elections. At this time, the NRCC will not be engaged in this special election," Andrea Bozek, a spokeswoman for the NRCC, said in a statement.

While the district is considered solidly Republican–it's been in GOP hands for more than three decades and former Republican presidential nominee Mitt Romney won the district by 18 points–political observers note the Democratic nominee, Elizabeth Colbert Busch, may have a chance at winning the special election. And the DCCC will be there to fight.

"This is an overwhelmingly Republican district that has become competitive because Republicans yet again nominated a flawed candidate. The DCCC will aggressively compete in uphill fights even in the most Republican territory," said Jesse Ferguson, deputy executive director and communications director for the DCCC.

Sanford's campaign responded to the recent Democratic ad buys, arguing that the amount of money pouring in simply proves Colbert Busch is more tied to Washington than she lets on.

"I think this raises an incredibly interesting question, and that is, what are Nancy Pelosi and national Democrats expecting from Colbert Busch that they're willing to spend a million dollars to get it?" Sanford said in a statement. "My opponent has gone through great lengths to distance herself from the liberal Beltway crowd, but it simply isn't believable that those same folks would be trying to buy this race for someone who would truly be an independent voice in Washington."

The new DCCC ad knocks Sanford for conducting his affair and mentions his secret trips to Argentina on taxpayer dollars, for which he was eventually caught in 2009 and fined for ethics violations. He and his former wife divorced in 2010, and he finished out his second term in 2011. He's now engaged to the woman with whom he had the affair.

"Mark Sanford walked out on us, violated our trust," the ad's narrator says. "Now he wants our trust again? Maybe Mark Sanford should just keep walking."

- CNN's Paul Steinhauser and Peter Hamby contributed to this report.