(CNN) - President Barack Obama said at the conclusion of the Boston Marathon bombing manhunt on Friday night that "we've closed an important chapter in this tragedy," adding that those who carried out the "vicious attack" failed because Americans "refuse to be terrorized."

Speaking at the White House, Obama praised the work of law enforcement after they captured the second of two suspects following a daylong search, and pledged continued federal law enforcement, homeland security and intelligence resources to the ongoing investigation.
END_OF_DOCUMENT_TOKEN_TO_BE_REPLACED

(CNN) - President Barack Obama spoke by phone on Friday night with Russian President Vladimir Putin with a manhunt underway for one of the suspects in the deadly Boston Marathon bombing.

According to a statement released by the White House, Putin "expressed his condolences on behalf of the Russian people" for the victims of the violence this week in Boston.
END_OF_DOCUMENT_TOKEN_TO_BE_REPLACED 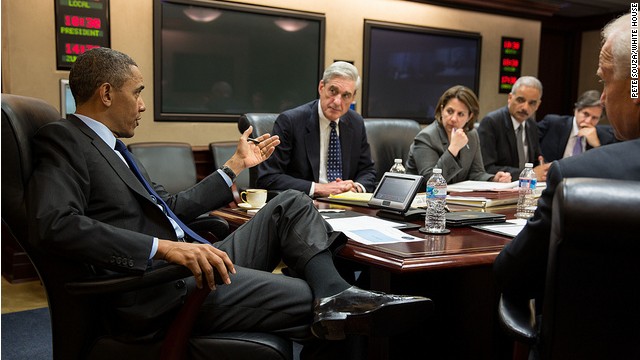 The briefing concluded shortly after 4 p.m. ET, according to a White House official. He then called Massachusetts Gov. Deval Patrick and Boston Mayor Thomas Menino "to express his condolences for the MIT police officer who was killed overnight," the official stated.
END_OF_DOCUMENT_TOKEN_TO_BE_REPLACED

(CNN) – Republican Rep. Peter King, former chairman of the House Homeland Security Committee, said Friday the Chechen community in the United States doesn't have a history of radicalization but argued it's time to question whether that's changed.

In an interview on CNN's "The Lead with Jake Tapper," the longtime congressman from New York also said it was "offensive" for the parents of the two suspected bombers to argue their sons were being framed in the U.S.
END_OF_DOCUMENT_TOKEN_TO_BE_REPLACED 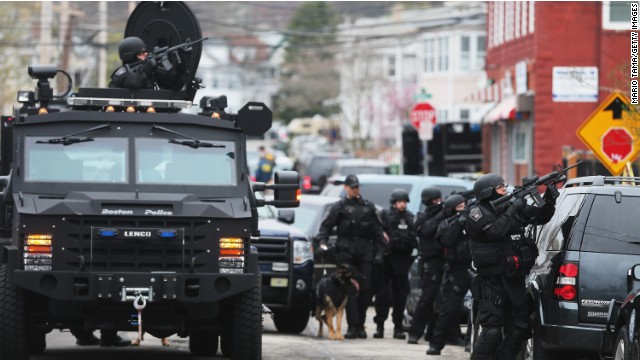 MANHUNT CONTINUES: WHERE IS DZHOKAR TSARNAEV HIDING? That was the question Friday facing thousands of law enforcement officers involved in the massive manhunt for the second suspect in the Boston Marathon bombing, a search that virtually shut down the Massachusetts capital. – Michael Pearson and Chelsea J. Carter

TEXAS EXPLOSIONS: Sixty people are unaccounted for in Wednesday's fire and explosion at a fertilizer plant in West, Texas, U.S. Sen John Cornyn, R-Texas, said Friday. He said authorities are checking to see whether any of them are in hospitals. Twelve bodies were recovered, law enforcement said earlier Friday.

END_OF_DOCUMENT_TOKEN_TO_BE_REPLACED

Democrats shouldn't rush the legislative process "given the events of this week," Iowa's Chuck Grassley said at the opening of a Senate Judiciary Committee hearing on the nearly 900-page bill.

(CNN) - Secretary of State John Kerry touches on the U.S. reaction to the Boston Marathon bombings.

(CNN) - The approval rating for the first Republican senator to back same-sex marriage has edged down, fueled mostly by a drop in support from members of his own party, according to a new survey.

An adviser to Sen. Rob Portman of Ohio, responding to the poll, says the senator's change of heart on the controversial social issue had nothing to do with politics.
END_OF_DOCUMENT_TOKEN_TO_BE_REPLACED

Washington (CNN) - U.S. intelligence and law enforcement agencies are again reviewing all intelligence on the two suspects in the Boston Marathon bombing for clues about their motivations and connections to possible terrorist groups, U.S. officials told CNN.

In the hours since the identities of Dzhokhar Tsarnaev and Tamerian Tsarnaev were confirmed by the FBI, “there is a very methodical and in-depth analysis under way on these suspects and the connections they may have had to any overseas group,” a senior U.S. official said.