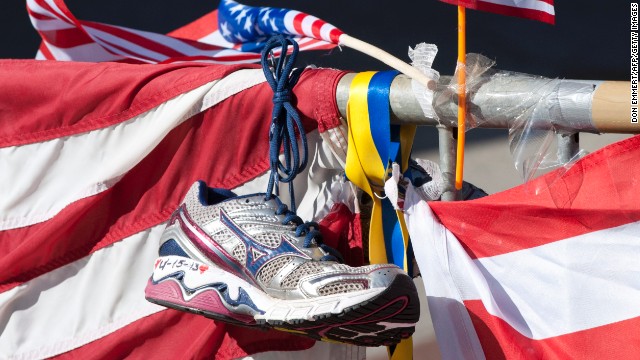 (CNN) – President Barack Obama united with Republicans on Saturday in condemning the violence that took place in Boston and praised the valor that ensued.

The president met with his National Security Council including top counter-terrorism officials and investigators.

The President commended the work that was done to pursue justice in the Boston Marathon bombing, and underscored the need to continue gathering intelligence to answer the remaining questions about this terrorist attack going forward," the White House said in a statement, adding that Obama "expressed appreciation for the efforts made by state and local officials, and law enforcement, in Boston and Massachusetts."

Earlier in his weekly address, Obama argued the deadly Boston Marathon bombings, which he described as an "act of terror," will not be remembered for the damage it caused, but the "stories of heroism and kindness."

"The world has witnessed one sure and steadfast truth: Americans refuse to be terrorized," he said.

A massive manhunt for the suspects ended in suspense Friday night after police took into custody the second suspect, nearly 24 hours after the first suspect died following a shootout with police.

The weekly addresses were recorded before the arrest, but Obama spoke to reporters at the White House late Friday after the arrest.

Obama praised first responders who converged on the blast scene to aid victims and then carried out a days-long search for the individuals respponsible for the bombing.

He pointed to volunteer efforts by marathon runners who donated blood and the "determined" doctors who tended to the wounded.

"If anyone wants to know who we are; what America is; how we respond to evil and terror – that's it. Selflessly. Compassionately," he said. "And unafraid."

His comments came two days after he traveled to Boston to offer a message of resilience and inspiration at an interfaith service in honor of the victims.

In the GOP's weekly address, Sen. Tim Scott of South Carolina also praised first responders and others who rose to aid victims and search for the suspects.

"While the perpetrators of this act of terror hoped that they could shake the confidence of a city, they have instead only strengthened the resolve of our nation," he said.

Scott cautioned those who would consider attacking the United States in the future that "there is no corner on Earth, no hiding place in America that will keep us from finding you."

"The leaders of this country will do everything in our power to bring justice for the families and the communities impacted," he said. "Our freedom is our most precious possession-any effort to take it away will only strengthen our determination."