But some things haven't changed a bit: the trademark smirk when he is amused, a squinty glare when he doesn't appreciate the question - and a quick turn to humor when the conversation turns to "legacy," including the scars of Iraq or the cloud of Katrina.

Ahead of library opening, Obama says Bush 'loves this country'

(CNN) - His predecessor may be his political opposite, but President Barack Obama stressed Wednesday that George W. Bush remained steadfast in his love of country.

Speaking at a Democratic fundraiser in Dallas on the eve of Bush's presidential library dedication, Obama said he was eagerly anticipating attending the event, which will bring together all five living U.S. presidents.
END_OF_DOCUMENT_TOKEN_TO_BE_REPLACED

(CNN) - One day before the dedication of the President George W. Bush Presidential Center in Dallas, two people considering runs for the White House in 2016 are giving speeches in the same city.

Former Secretary of State Hillary Clinton addressed the National Multi Housing Council. The trade association, which represents apartment owners, developers and lenders, told CNN that Clinton would address around 350 people, speaking for about an hour, with a moderated question and answer conversation.
END_OF_DOCUMENT_TOKEN_TO_BE_REPLACED

Washington (CNN) - Thousands of Department of Justice employees can breathe a little easier after learning they won't be furloughed due to forced budget cuts, but that assurance is good only until October 1, when a new fiscal year begins for the federal government.

A glimpse at a Bush White House before everything changed

Dallas (CNN) - It's getting harder to remember life before September 11, 2001, but as soon as you walk through the door, the George W. Bush Presidential Library and Museum aims to take you back there.

Bush was first elected on November 7, 2000, and sworn in on January 20, 2001, so the months before the 9/11 terrorist attack were but a brief moment in the Bush presidency.

(CNN) – Anthony Weiner, looking to re-enter politics after resigning in shame after a sexting scandal, couldn't say for sure Wednesday whether more lewd photos of him are poised to be released.

The former New York congressman said the sexting scandal was behind him.
END_OF_DOCUMENT_TOKEN_TO_BE_REPLACED

WHO IS MAILING RICIN? FBI searches for clues in ricin investigation… FBI agents on Wednesday searched the former martial arts studio of a Tupelo, Mississippi man in connection with the investigation into ricin-tainted letters sent to President Barack Obama and other officials, the man's lawyer, Lori Basham, told CNN. Agents in hazardous materials suits had searched James Everett Dutschke's home on Tuesday, the same day prosecutors dropped charges against another man arrested last week on suspicion of sending the letters.

END_OF_DOCUMENT_TOKEN_TO_BE_REPLACED

(CNN) - Rhode Island moved toward becoming the 10th state in the nation and the last in New England to approve same-sex marriage after its state Senate voted Wednesday to approve a bill extending marriage rights.

A new national poll suggests it depends on who's answering the question.
END_OF_DOCUMENT_TOKEN_TO_BE_REPLACED 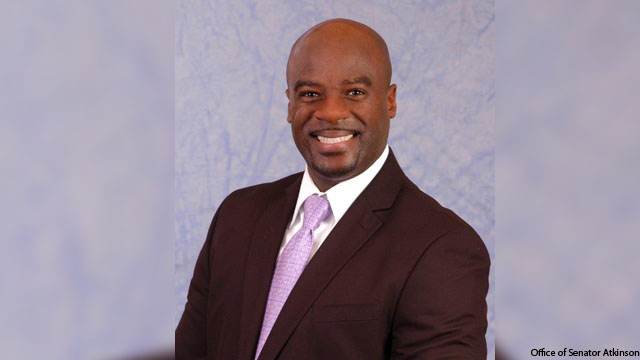 Lawmaker's 'impulse decision' to come out

(CNN) - When Nevada state Sen. Kelvin Atkinson entered a floor debate Monday over a legislative effort to repeal the state's same-sex marriage ban, he had no idea he'd be waking up the next morning with his name in national headlines.

That's because Atkinson, D-North Las Vegas, publicly announced he was gay. The decision, he said, was just as much of a surprise to him as it was to others.
END_OF_DOCUMENT_TOKEN_TO_BE_REPLACED