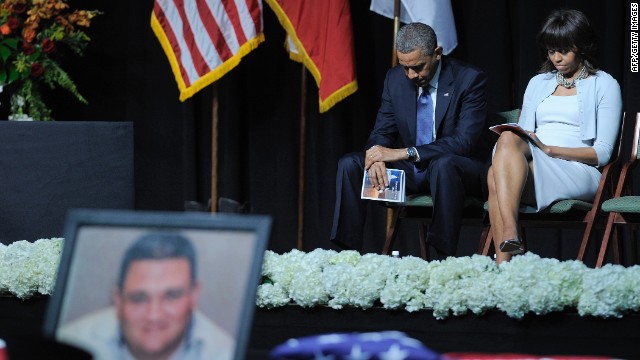 (CNN) - The men, all volunteers, who rushed into a burning fertilizer plant in Texas before it exploded last week displayed a courage beyond words, President Barack Obama said at a memorial event in their honor Thursday.

"When you got to the scene, you forgot fear and fought the blaze as hard as you could, knowing the danger. Buying time so others could escape," Obama said at the event, held on the campus of Baylor University in Waco. "Then about 20 minutes after the first alarm the earth shook and the sky went dark and West changed forever. Today our prayers are with the families of all we've lost."

Fourteen people perished in last week's explosion, 12 of which were first responders. Like most small towns in Texas, the West brigade was formed entirely of volunteers.

"America needs towns like West. That's what makes this country great: towns like West," Obama said, noting that while the nation's attention was distracted from the disaster there by developments in the Boston Marathon bombings, the town would not go forgotten.

"Know this: while the eyes of the world may have been fixed on places far away, our hearts have also been here," he said, adding later that the nation would provide support for the small community in the weeks and months to come.

"We'll be there even after the cameras leave and after the attention turns elsewhere," he said. "Your country will remain ever ready to help you recover and rebuild and reclaim your community."

"You have been tested, West," he said. "You have been tried. You have gone through fire. But you are, and always will be, surrounded by an abundance of love."

Before arriving at the event, Obama surveyed the damage caused by the blast from his helicopter, which circled the enormous crater where the fertilizer plant once stood.

After his speech, Obama was slated to meet privately with family members of the firefighters who were killed.

Earlier in the day, Obama attended the dedication ceremony for the George W. Bush Presidential Center in Dallas. First lady Michelle Obama accompanied him at both events.