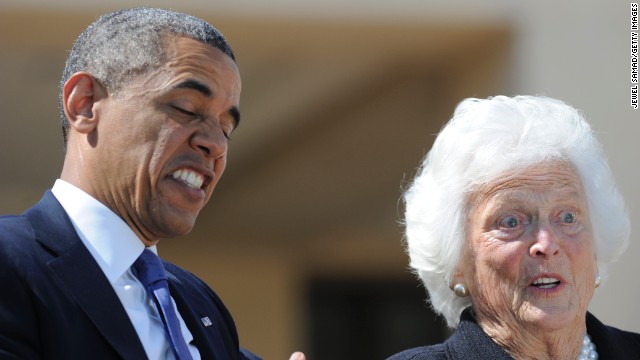 Caption contest: What's with the faces?

(CNN) - Something strange is happening in the photo above - we just don't know what it is. Cameras caught the moment, but not what prompted President Barack Obama and former first lady Barbara Bush to make these faces.

The pair was attending the dedication ceremony for the George W. Bush Presidential Center in Dallas.

What do you think they're talking about? Write your own caption for the photo in the comments below.

(CNN) - President Bill Clinton delivered a few friendly jokes during his remarks at the George W. Bush Presidential Ceremony dedication ceremony in Dallas, with one of them poking fun at his successor's new hobby of painting.

"I probably shouldn't say this, but I'm going to anyway. Your mother showed me some of your landscapes and animal paintings, and I thought they were great. Really great. And I seriously considered calling you and asking you to do a portrait of me–until I saw the results of your sister's hacked e-mails," Clinton said. "Those bathroom sketches were wonderful, but at my age, I think I should keep my suit."
END_OF_DOCUMENT_TOKEN_TO_BE_REPLACED

This marks the first time the attacks have been so politicized in the search for answers for how the two brothers suspected of the bombings slipped past government anti-terror detection measures.
END_OF_DOCUMENT_TOKEN_TO_BE_REPLACED

Dallas (CNN) - Some may disagree whether George W. Bush was a "uniter, not a divider," as he liked to say, but he is expected to get all five living presidents together for the dedication of his presidential library.

Five presidents - three Democrats and two Republicans - are scheduled to speak Thursday in Dallas at the ceremony for the George W. Bush Presidential Center. 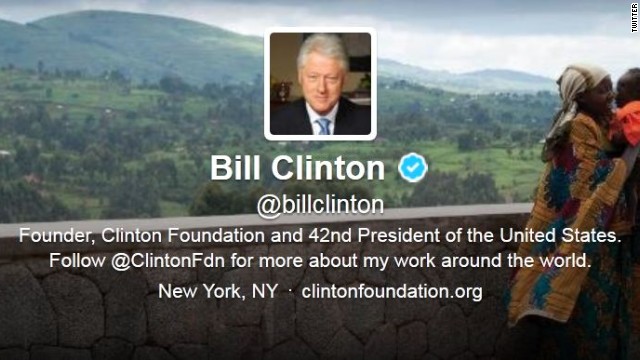 The satirist and comedy show host got Clinton to join Twitter earlier this month, even starting up an account for the former president: @PrezBillyJeff
END_OF_DOCUMENT_TOKEN_TO_BE_REPLACED

(CNN) – While former President George W. Bush says he wants his brother Jeb to run for president in 2016, their always-blunt mother said Thursday she feels differently.

“He's by far the best qualified man, but no. I really don't,” she said when asked if her son, the former Florida governor, will make a White House bid.
END_OF_DOCUMENT_TOKEN_TO_BE_REPLACED

Bush weighs in on brother's 2016 potential

(CNN) - If former Florida Gov. Jeb Bush decides to seek the Republican presidential nomination in 2016, he'll have one major supporter at his side.

Former President George W. Bush, who's stepping back into the spotlight as his presidential library opens this week, says he thinks his younger brother should throw his hat into the ring.
END_OF_DOCUMENT_TOKEN_TO_BE_REPLACED

Bush on Boston: 'I was reminded that evil exists'

(CNN) - Former President George W. Bush, whose presidency was largely consumed by the terror attacks on Sept. 11 and the aftermath, weighed in on his thoughts about the recent violence in Boston.

"I was reminded that evil exists," Bush told CNN's chief national correspondent John King. "And that there are people in the world who are willing to kill innocent people to advance a cause."

CNN: Representative: Father of Boston bomb suspects to fly from Russia to U.S.

His older son's body remains unclaimed. His younger son is hospitalized with severe injuries, and faces terrorism and murder charges. Anzor Tsarnaev is expected to step off a flight in the United States in the coming days after his travel from Dagestan. He may be bringing along important information for the investigation into the marathon bombings that killed three and injured hundreds on April 15. He is to depart for the United States as soon as Friday, human rights activist Kheda Saratova told CNN. Saratova is serving as the parents' representative. Tsarnaev has said he will cooperate in the investigations into the alleged crimes of his sons, Dzhokhar, 19, and Tamerlan, 26. The elder son was killed while the two allegedly violently resisted and fled police.

ALSO SEE: Christian Science Monitor: Why trial for Boston bomb suspect could be at least a year away

WATCH: VIDEO – CNN's Joe Johns examines the databases on which Tamerlan Tsarnaev was placed before the Boston bombing.