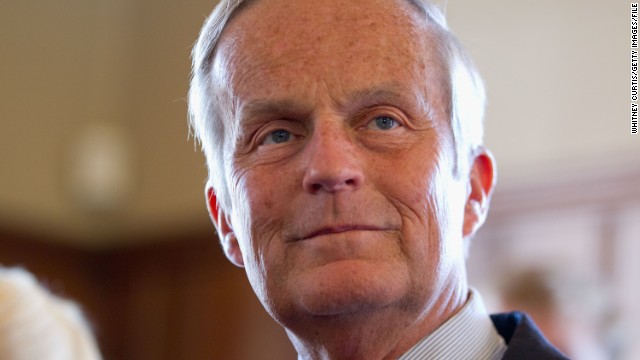 (CNN) – Nearly six months after losing a Senate race and becoming a political punch line, former Rep. Todd Akin weighed in again on his controversial remarks about rape and pregnancy, saying in a recent interview he has "relived" the episode "too many times."

In an interview with CNN affiliate KSDK in St. Louis, the former Missouri congressman also hit back at Karl Rove, founder of the independent group American Crossroads, for his new group designed to recruit GOP candidates that won't make the same mistake as Akin.

Facing one of the most vulnerable incumbent Democrats, Claire McCaskill, in last year's Senate race, Akin was expected to win the contest. Shortly after becoming his party's nominee, however, he made a comment that soon made him a target of Democrats and many Republicans.

Talking about his anti-abortion stance, the unapologetic social conservative said in an August interview that if a woman experiences "legitimate rape, the female body has ways to try to shut that whole thing down."

Democrats quickly tore into him over the statement, which lacked scientific basis. And in the next few days, top GOP leaders seeking to distance the party from his comments called on Akin to step out of the race. Then-presumptive GOP presidential nominee Mitt Romney even issued a statement asking the Missouri Republican to drop out.

"Republican leadership was strong that you have to step down," Akin said. "But there was a very strong grassroots element saying don't you give in to those party bosses. You stay in there and you keep fighting."

Though he apologized for his remark, he remained in the race and lost to McCaskill, 39%-55%. Romney, on the other hand, won Missouri with 54% of the vote.

Asked if he could take back his comment, Akin said, "Oh, of course I would! I've relived them too many times. But that is not reality."

"All of us are fallible," he said, elaborating further. "We make mistakes, and we say things the wrong way."

Since the November elections, Republicans have pointed to Akin and Senate candidate Richard Mourdock of Indiana, who also lost an election after making controversial statements about rape, as candidates that tainted the party as a whole. Earlier this year, Rove announced the start of the Conservative Victory Fund, a new group aimed to help Republican candidates sail through GOP primaries.

"Some people think the best we can do is Todd Akin and Richard Mourdock – they're wrong. We need to do better if we hope to take over the United States Senate," Rove, the former top political adviser to President George W. Bush, said on Fox in February.

"Karl Rove has made himself an expert," Akin said. "I think I lost one race. He managed to lose about 12 of them in one night."

This isn't the first point of tension between the two. Rove apologized to Akin in late August for blasting the embattled candidate at a private event.

"We should sink Todd Akin. If he's found mysteriously murdered, don't look for my whereabouts," Rove said at a private fundraiser, according to a Businessweek reporter who was not supposed to be there.

While Akin said in the recent interview he's enjoying life outside of the political sphere-"I had chance to change oil in cars, fix things around the house, see my grandchildren"–he didn't rule out a potential re-entry into politics.

"It's one of those things that depends on the circumstances really. I don't rule anything out," he said. "I consider it a bright new future and I'm interested to see what the possibilities are."